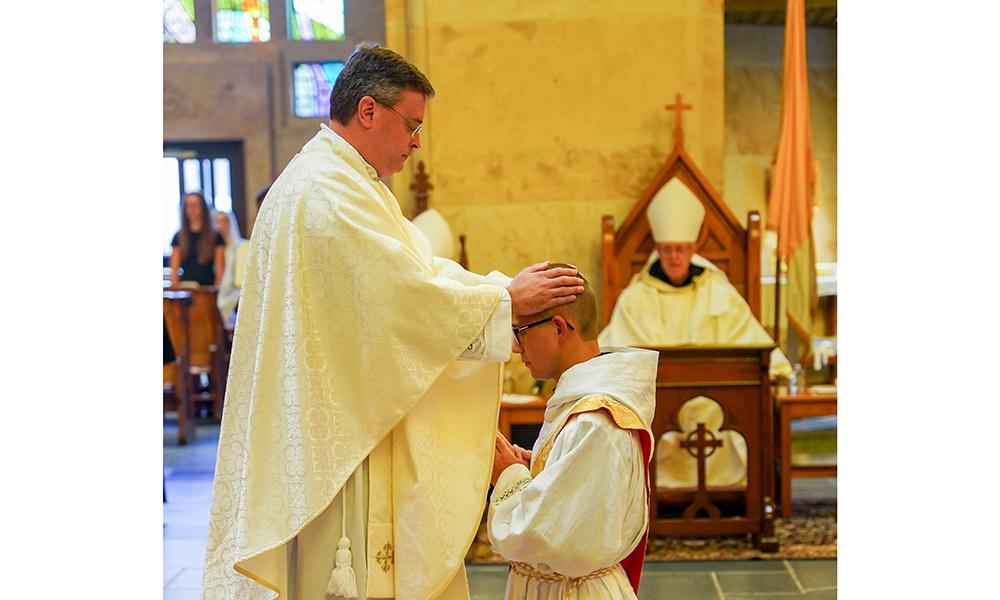 ‘An image of Christ while being another Christ’

The monk provides a preeminent example of the exhortation of our Lord in today’s Gospel, “Do not be afraid any longer, little flock, for your Father is pleased to give you the kingdom.  Sell your belongings and give alms.  Provide money bags for yourselves that do not wear out, an inexhaustible treasure in heaven that no thief can reach nor moth destroy. For where your treasure is, there also will your heart be.”

As St. John Paul II said in his exhortation Vita consacrata, “In the consecrated life, then, it is not only a matter of following Christ with one's whole heart, of loving Him ‘more than father or mother, more than son or daughter’ (cf. Mt 10:37) — for this is required of every disciple — but of living and expressing this by conforming one's whole existence to Christ in an all-encompassing commitment which foreshadows the eschatological perfection … .” (§16)

Therefore, the life of the monk is meant to manifest to the people of God faith in and hope for the full possession of the Kingdom of Heaven. As we heard in our second reading, “Faith is the realization of what is hoped for and evidence of things not seen.” It is not hyperbole to say that the vocation of the monk is to be “evidence of things not seen” – like the Kingdom of Heaven. By showing the world how to live in the world without being worldly, the monk proclaims that there is a greater world to come. And, by conforming his whole existence to Christ – to become, we might say, an image of Christ – the monk is called to be evidence to the world of the continued presence of Christ among us.

However, Father Dominic, now you are also a priest, and a priest is configured in a profound way to Christ crucified and risen. As you vest yourself with the white alb for the celebration of Holy Mass, everyone, including yourself, is reminded of the configuration of your soul to Christ, who is now risen from the dead and presiding at the Eternal Mass in Heaven.

The stole is placed over the alb, as a reminder that the Lord first laid down His life for His people.  While the monastic vocation does not entail in its essence the care of a particular flock, though monks may be assigned as pastors of souls, the vestments of a priest remind you of the fact that you are called to lay down your life for the salvation of your brothers in view of the Resurrection to come.

And over both of these is the chasuble, the sign of charity. Charity is loving God above all things for his own sake, and loving our neighbor as ourselves, for the love of God – a complete selfless and self-giving love. Therefore, it is evident that only with the theological virtue of charity may a priest ever attempt to fulfill his mission – to act in the person of Christ, laying down his life for the people of God and being raised up to the glories of the altar in Heaven.

Yet, underneath all of this is your monastic habit – the sign of, and a source of grace for, the stable foundation of your vowed life. Your monastic habit is the symbol of the stable foundation of the meaning and purpose of your life. The habit is not a mere piece of clothing, but an external sign of the vows you made on the day of your profession.

Your ordination to the priesthood, therefore, does not perfect your monastic vocation, but qualifies it. Your acceptance of your vocation was already perfected at the moment you took your solemn vows of stability, obedience, and conversion of life through the Benedictine Rule. The vocation of a monk is to excel in perfecting the life of Christ – to become an image of Christ Himself to the world – through the graces received from the faithful living of out of the vows he has made.

Seen in this light, when a monk is ordained a priest, rather than it being a “promotion” of the particular monk, it is an added obligation to spend his life directed toward the salvation of the souls of his brothers. He does this certainly by offering the Holy Sacrifice of the Mass for the community, by hearing the confessions of his confreres, and by offering prayers and other sacrifices for the brethren.

Additionally, in being attentive to the labors entrusted to him by the abbot for the good of the community, the monk who has been ordained a priest fulfills all his duties in the person of Christ.  Therefore, the monk who is ordained a priest has an even greater obligation to ensure that the manner of the carrying out of his daily work reflects who he is interiorly – an alter Christus.

So, Father Dominic, yesterday you began your new life as a monk and as a priest. As one who is called to be an image of Christ while being another Christ.

Therefore, we pray today, that through the intercession of St. Benedict, St. Bernard, St. Dominic, and St. John Vianney, that you may continue to grow in perfection as a monk, so that your life will manifest to all of us the beauty of one who is called to be an image of Christ while being another Christ.

Christ, Who was obedient to the Father’s will, Who made His home among us, and Who made it possible for us to have conversion of our lives.

Christ, Who selflessly laid down His life for us, so that we might inherit the Kingdom of Heaven.