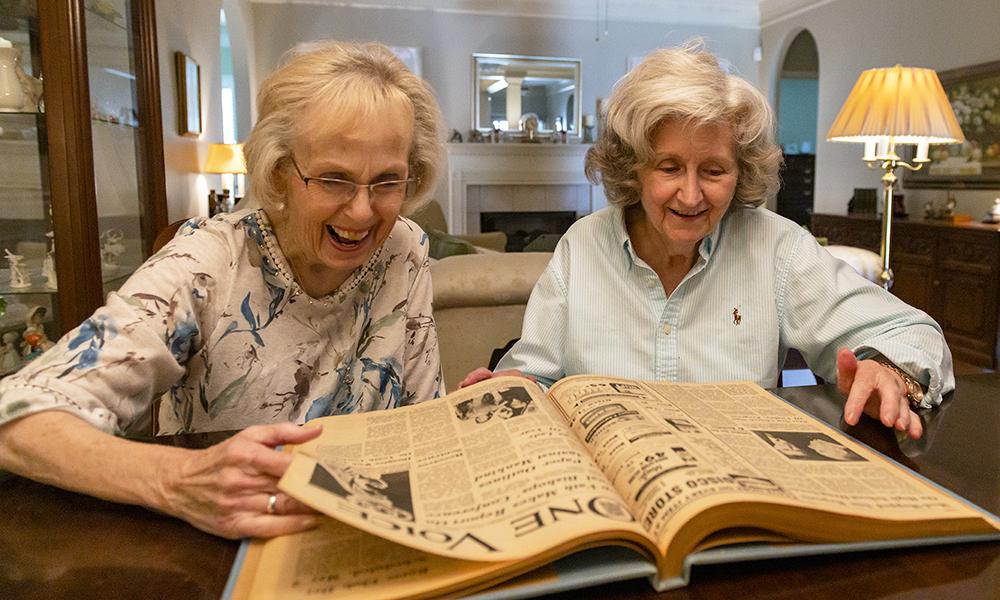 The One Voice’s mission lives on in new format.

Catholic journalism in the state of Alabama can be traced to the Catholic Week, newspaper for the Diocese of Mobile-Birmingham, which started printing issues in 1934.

When Mobile was elevated to an archdiocese in 1969, the Diocese of Birmingham was created, but the Catholic Week kept its ties to Mobile. Realizing the need for an official means of communication with his flock, Bishop Joseph Vath, the first Bishop of Birmingham, decided his fledgling diocese needed its own newspaper.

Bishop Vath sought the help of Irish born Father John T. Igoe, a jovial yet dedicated priest. Luckily for the two men, a young lady by the name of Sally Crockett, who had worked in the Catholic Week's Birmingham office under Msgr. Frank Wade, was willing and able to join the new publication's staff.

Planning the new publication did take time, but on Jan. 1, 1971, the first issue of the One Voice arrived in the mailboxes of the faithful with Bishop Joseph Vath as its founder, Father John Igoe as editor, Sally Crockett as the manager, Rose Lovett as the editorial assistant and John May as the circulation manager. Five years later, Ann Lanzi would join the ranks, after which the staff wouldn't change much. Lanzi explained, "To me, working at the One Voice has been more than just a job, it has always been a mission."

Father Igoe, Crockett, and Lanzi were the steadfast foundation for the paper, week after week. When Father Igoe passed away in 2001, the reins were handed to Crockett, and in 2004, I joined the team, creating yet another One Voice triumvirate. Crockett retired in 2019 with a staggering 56 years of dedicated service to the Church in Alabama.

In the inaugural issue of the One Voice, Bishop Vath debuted his new column, "The Bishop Chats." For its first installment, the bishop wrote about the newspaper and his hopes for the publication.

"Beginnings are usually difficult. For example, to begin a newspaper one must find a new name, a new format, and new management. Still it is a great challenge. This challenge consists of laying a good foundation. It must be deep and strong and durable. I believe that this expresses what we want for One Voice to be, namely a deep, strong and lasting voice."

Bishop Vath continued, "Projecting the work of the One Voice, it appears to me that it should unite all of us in our goals, projects, plans, evaluations, and progress. This is a mighty task for One Voice. It will tell us of God's Word, the sacramental life of the Church, and our government by the pope and the bishops united with him as expressed by our shepherd. In short, One Voice hopes to tell the news, locally, nationally, and internationally, as it develops in our world and affects all the people of God. In one sentence, our search for the meaning of God's Word in our world will be expressed in One Voice."

Undoubtedly, over the years the newspaper has fulfilled Bishop Vath's hopes. Each issue featured news from around the diocese and the world, various columns about the Catholic faith and the history of the diocese. Rose Lovett's "Remember...25 years ago" was an invaluable resource documenting Catholic history in Alabama. Other columns such as "Know your faith," "Questions and Answers" by Father Richard P. McBrien, "Teenage problems" by Father Martin, C.SS.R., "Mission: Music" by the Mission Singers, "Worship & the World" by Father Joseph M. Champlin, and the more recent "Apologetics 101" by John Martignoni and "The Catholic Tradition" by Dr. David Anders all served as the "deep, strong, and lasting voice" Bishop Vath envisioned.

The "good foundation" created in 1971 enabled the One Voice to approach Bishop Steven Raica, Birmingham's fifth bishop, with the suggestion of a pivot in format. The way in which news and general information is acquired in the present day opened the door for the One Voice to become a magazine. Like the newspaper, the magazine will have columns informing the people of the diocese about their faith and their life and will also feature major news stories. The additional benefit of the magazine will be its ability to share the stories of those in the pews. This approach will accentuate the One Voice's mission of evangelization.

Speaking on the magazine keeping the name One Voice, Bishop Raica explained: "It captures so much of what our mission is. All our efforts at evangelization...must be the result of our desire to love each other as God loved us. The title One Voice remains as a time-honored recognition of the past, a continued work to be accomplished in the present, and always a look forward toward a noble goal: '…to glorify the God and Father of our Lord Jesus Christ.'"