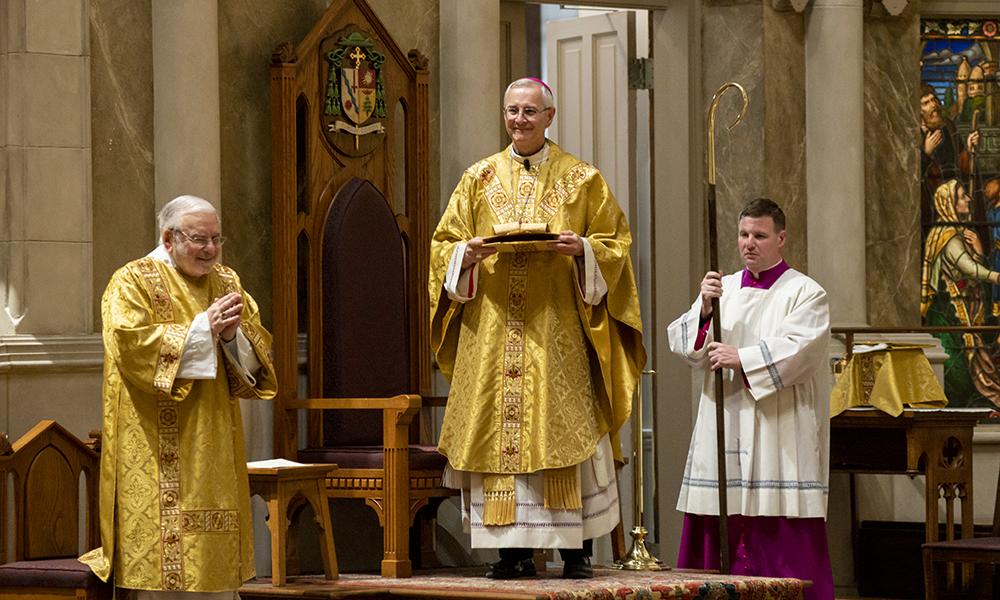 ‘Knowledge With Faith, Builds Up’

On Nov. 11, Bishop Steven Raica celebrated the first annual Diocesan Gold Mass. The Mass is for STEM professionals, academics, researchers, and students. The Mass was co-sponsored by the Birmingham chapter of the Society of Catholic Scientists. The complete text of the bishop’s homily follows herein.

Dear sisters and brothers in the STEM sciences,

It is my distinct honor to celebrate with you today this “Gold Mass” for the spiritual benefit of the scientific community assembled here in Birmingham, especially for your conference at Samford University. I believe this is, historically speaking, the first ever “Gold Mass” held here in Birmingham. I pray that it will not be the last. After all, it is an opportunity to gather together to implore the maker of the universe for the wisdom, understanding, and grace to discover through sound research ever greater understanding of human nature, while at the same time unlocking the secrets of nature.

Overall, I cannot thank enough the Catholic scientists who are shouldering the burden to plumb the depths of your research whether one is dealing with the smallest of atoms or trying to grasp the breadth, depth, and majesty of the universe, of which earth itself may seem merely as an atom. To stretch the knowledge of science means, in large part, to set aside pre-conceptions and allow reality to impose itself upon us in ever new and dramatic ways. Findings, oftentimes the result of painstaking work through the scientific method or other appropriate methods, or even by surprise, that lead to new conclusions, lead us to an appreciation of this world around us in which we seem like mere temporary actors on a stage at a given epoch in history.

Nonetheless, I can draw from the work already done to highlight, once again, the fact that some of the significant scientific findings have come from people of faith – from priests, women and men religious, and laity who were not afraid to follow the curiosity and wonder of the reality before them and seek to understand it. All seemed to want to know: “What is this precisely?” “What is its nature?” “How can it be measured?” “What impacts does it have on other realities?” “How does it impact human existence?”

If I may say so, the scientific endeavor always stands before the infinite reality and mystery. The disproportion of reality and knowledge suggests that what is before us in the entire universe is never enough and consumes us to go always deeper. It seems as though the science, in its dynamism, never reaches a once for all and final conclusion – but is pressed even further toward the horizon of eternity for newer understandings that may even overturn the prevailing wisdom.

One cannot help but think of what Louis Pasteur must have endured while on the faculty of the Sorbonne with his discovery of microbes as a cause for some disease and illness – completely overturning the prevailing medical science of the day. The resistance he must have faced among his colleagues in light of his discovery must have been immense – a discovery which we now assume and utilize as the basis for modern medicine today.

That’s why I personally swallow hard when someone wants to “follow the science” as though it were something completely settled with absolute certainty and nothing more can be learned. Rather, our minds push to make sense and find meaning in what our senses are reacting to. We remain open to the wonder and mystery through our own curiosity that can push more refined conclusions even farther.

Father Luigi Giussani, a priest who reflected seriously about reason and the impact of reality, taught by his life that the human heart can be “wounded” again by the majesty of the cosmos so that it doesn’t close in on itself, but rather opens itself up to the infinite Mystery in all of its dimensions. Indeed, the encounter with the beauty of Christ “brings reason back to its truth: that its very being is ‘to be touched by Being,’ just like the faculty of sight exists by being struck by light.” (cf. Luigi Giussani, “The Religious Sense,” McGill-Queen’s University Press, Montreal, 1997)

Through our Mass today, may we remain open to the amazing fact of the Incarnation of Christ, who became flesh in our midst, is with us today to guide our work.

One of the more influential scientists, Henri Poincaré, rightly observed: “The scientist does not study nature because it is useful, he studies it because he delights in it, and he delights in it because it is beautiful. If nature were not beautiful, it would not be worth knowing and if nature were not worthy of knowing, life would not be worth living. Of course, I do not speak here of that beauty that strikes the senses, the beauty of quality and appearances; not that I undervalue such beauty, far from it, but it has nothing to do with science; I mean that deeper beauty coming from the harmonious order of the parts, and that a pure intelligence can grasp.” (Cited by Jean Mawhin in “Henri Poincaré. A life in the service of science,” Notices of the AMS, Vol. 52, pp. 1036-1044, 2006)

There is a Latin adage I remember from years ago that provided sage advice in dealing with the interrelated and interlocking facets of faith and science: “Scientia sine pietate inflat; pietas sine scientia errat; scientia cum pietate aedificat.” “Knowledge without faith, swells up; faith without knowledge, errs; knowledge with faith, builds up.” We need a place, a new aeropagus, where, like “Meeting” in Rimini, we can talk about “art, cinema, and physics, [space], about everything…”, that is, a place where everything is interesting in light of the wonder we have that emanates from the itch of the human mind and heart to know more of this world which we have been plunged into since our birth. As Juan José Gómez Cadenas, a 61-year-old Spanish physicist noted, “What we see, touch, and observe never cease trying to amaze and move us.” For “the reason of all reality exists.” (Traces, “The Miracle of Existing,” Vol 23, October 2021, p. 17)

Today, we join together faith and reason - like two wings that are needed to fly - in the pursuit of a more complete knowledge and understanding that gives a deeper meaning to world and universe and human life knowing that the logos, reason, indeed, Christ Himself, is at the very heart of life itself.

May God bless you all