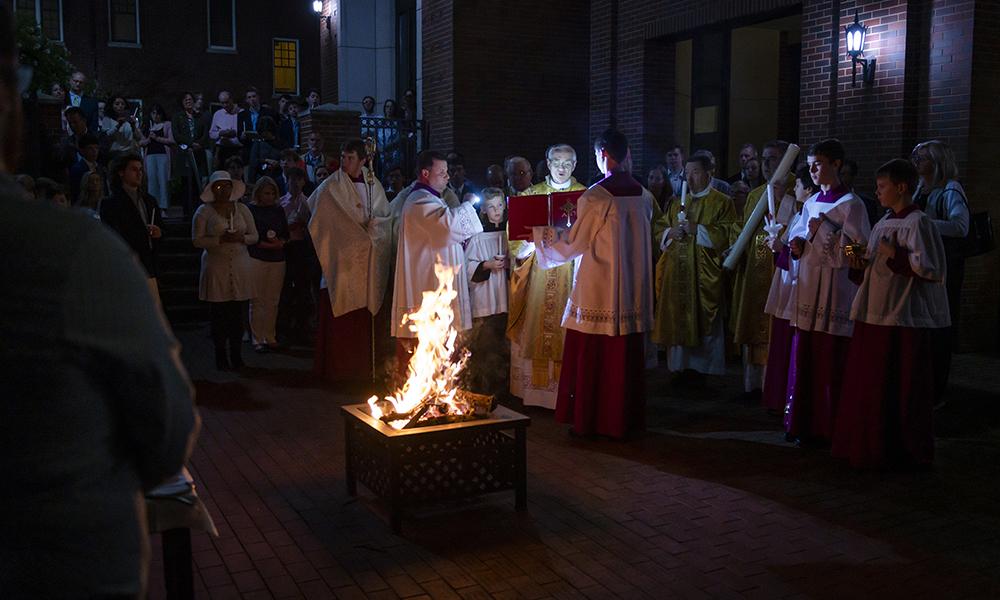 ‘Hope for Our Troubled and Confused Times’

On April 16, Bishop Raica celebrated the Easter Vigil at the Cathedral of St. Paul and welcomed three new Catholics into the Church. The complete text of his homily follows herein.

My sisters and brothers in the Risen Christ, this is the day the Lord has made! Let us rejoice and be glad!

On behalf of Bishop Baker, the diocesan and cathedral staff, especially Father Jerabek, Father Adams, and Father Ward, I extend our very best wishes to you, your family, and upon all our guests for a joyous Easter!

On this Easter Vigil, it is my immense joy to echo the same message that the women who found the tomb empty and later encountered Him early that Easter morning. They ran to inform Peter and breathlessly proclaimed, “He is alive!” It’s unbelievable! “He is alive!” We saw Him with our own eyes.

No other message would have jarred them from their sadness, complacency, and disappointment. “He is alive!” Now, this didn’t exactly fit reality as they knew it or the way life and death should go! They saw Him expire on the cross and put in the tomb! As they processed it, for them, as they knew it, everything was over. Now, something totally different has occurred! Something totally new! He is alive!

In the passing of time, others began to see Him too, in the most unusual places: cooking breakfast on the beach with roasted fish on the fire; waiting for Peter to come back from fishing all night; serving as the gardener; coming through the locked and bolted doors of the Upper Room proclaiming, “Peace be with you!” (cf. Jn 20:19 passim); walking as a wayfaring stranger with two disciples headed for Emmaus, unbeknownst to them until they settled down for dinner with those telling words, “Stay with us! … It is late!” (cf. Lk 24:29) Then, “He took the bread, blessed it, broke it, and gave it to them – with that their eyes were opened!” (cf. Lk 24:30-31) It was Him – there was no doubt! They ran back to announce to the brothers, “He is alive!”

It wasn’t in power and majesty that He came among them. It was merely the simplicity of a presence! Like for me, something my heart was made for and waits for and suddenly recognizes!

Today, two millennia later, He is seen! He is experienced! There are vibrant clues right before our very eyes that remind us: He is not dead! He is alive!

Indeed, here in this Cathedral church of St. Paul in downtown Birmingham, Jesus lives. Of course, He is alive in the Word proclaimed, certainly He is alive in the sacraments celebrated, truly in the bread and wine that become His Body and Blood to be given and shared! Without a doubt, He is alive in the sins that are forgiven! Yes, He is here! He is alive! If that were not true, we would be in a sorry state of deception and fraud. We would be the most pitiable lot and our sins would remain.

St. Augustine wrote in one of his stirring homilies something very beautiful: “Who is Christ if not the Word of God (and he quotes from John’s Gospel chapter one): in the beginning was the Word, and the Word was with God, and the Word was God? This Word of God was made flesh and dwelt among us. He had no power of Himself to die for us: He had to take from us our mortal flesh. This was the way in which, though immortal, He was able to die; the way in which He chose to give life to mortal men: He would first share with us, and then enable us to share with Him. Of course, we had no power to live, nor did He of Himself have the power to die. // Accordingly, He effected a wonderful exchange with us, through mutual sharing: we gave Him the power to die, He will give us the power to live.”

Through His resurrection, Jesus conquered sin and death. He conquered every anxiety and despair. He gave us the possibility to live, eternally. No place else can we find such a promise and hope – not in fame, fortune, or health, or circumstance. By assuming our flesh, we gave Him the power to die. Through His resurrection, He gave us the power to live – and live forever.

A couple years ago, we were all saddened to learn of the tragic fire that consumed one of the best-known cathedrals in Europe, Notre Dame in Paris, France. This icon of the French nation and of our faith received an extraordinary amount of publicity and media attention. It was built of stone. It seemed so invincible as its magnificent towers soared toward the heavens. It was a point of reference for the faithful and non-believers alike. Everyone talks about what was ruined and what was saved or salvaged. Relics of the crown of thorns and statues we saved. The great organ was untouched by the water, but there is smoke and soot damage to the pipes.

Some suggest that it is symbolic of our Catholic and Christian faith today, crashing down to an ash heap in a world that has taken a different turn. They no longer sense the presence of Christ. Some see it symbolically as the Church in disarray. Didn’t something like this happen to the Apostles and disciples at the death of Jesus? It was when the hopes and dreams of the disciples and the women seemed lost. Afterall, the one they put all their hopes in died! It seemed so final when the stone was rolled in front of the tomb. They thought it was like a dream – all was lost. Like them, our minds are whirling, wondering what just happened. What next? What will be the future?

While people were marveling at the genius of its gothic architecture without the aid of modern construction tools – it took almost 200 years to build – some are forgetting what was most important. We Catholics know it well. It is not the knowledge of our doctrine, although that helps! It is not the moral purity of her leaders or members, although that helps! No! Rather, it is in the humility and unworthiness and almost emptiness that I find the most remarkable thing that I cannot un-see or unknow. In the shell of the Cathedral rubble, the gilded cross radiated in splendor when they entered to inspect the damage. Right below it Our Lady cradling her Son – the Pietà! Still more, it is the privileged place for that piece of bread that has become the Body, Blood, Soul, and Divinity of Jesus Himself, preserved in the tabernacle. That, too, was saved by the chaplain for the fire brigade. He took it and blessed the church, and he attests that the fire receded right before him. This place is the point of gathering where the disciples of Christ – the visible Body of Christ – becomes real and manifest. It is a visible sign in a searching and saved community who proclaims: “We have found the one who is truth.” “We have found the one who is life.” “We have found the one who loved me right to the end.”

We could call the Cathedral of St. Paul our own Notre Dame Cathedral. St. Paul’s is the soul of the community here in downtown Birmingham. It is the remarkable witness of the presence of Christ – the Risen Christ, the waiting Christ – in a local community that beckons believers and unbelievers alike. The confident and the questioning; the strong and the weak; those who have certainty and those who have doubts; those who are well connected and those who wander alone and afraid. He is risen! He is alive!

For that reason, we have three catechumens who will be baptized tonight. They have found that community which continues to rise from the ashes to be one that gives life. Here from ashes and death and destruction, a new people arise to give witness by their very lives: “He is alive!” “I have seen Him!”

May this Easter, for us, be a reminder that there is hope for our troubled and confused times. This hope has a name – Jesus Christ, Savior and Lord - risen in glory and here with us. May God bless you and your families! 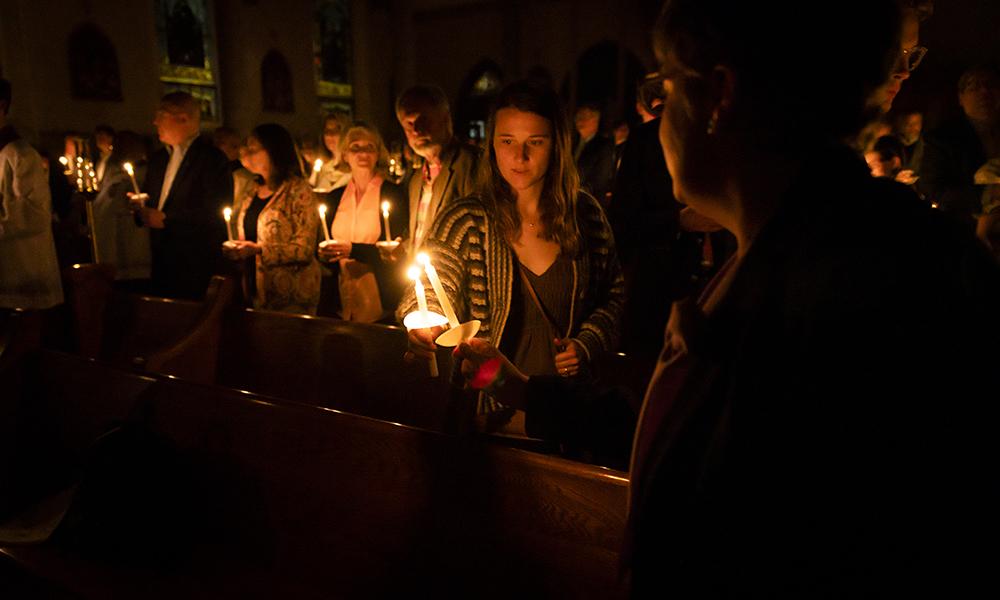 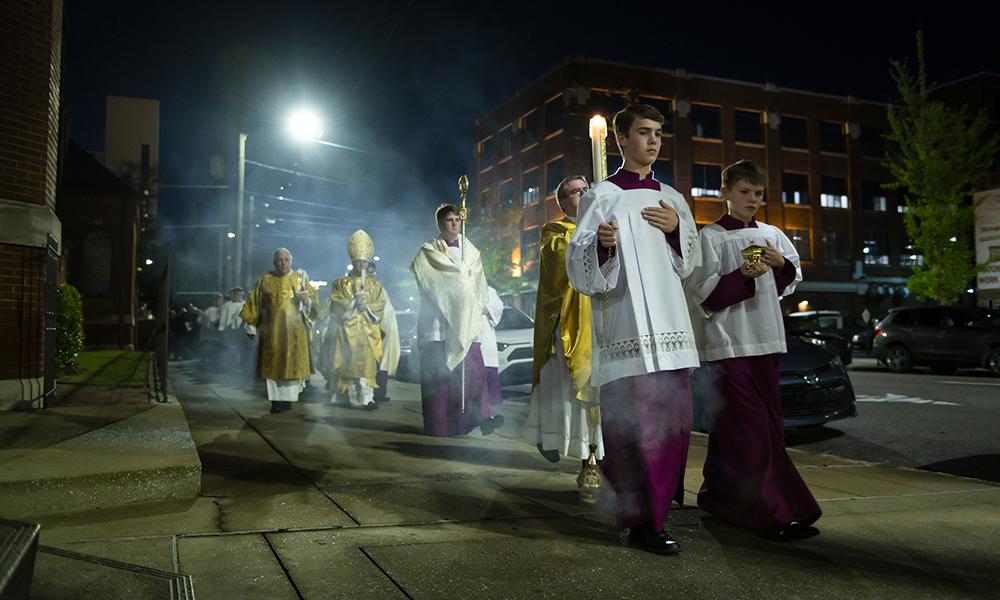 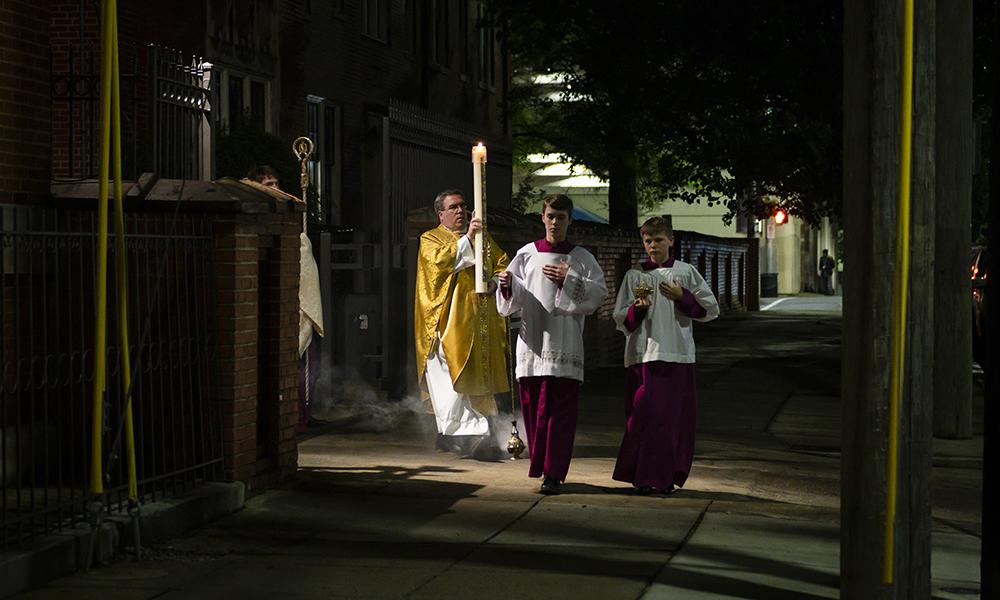 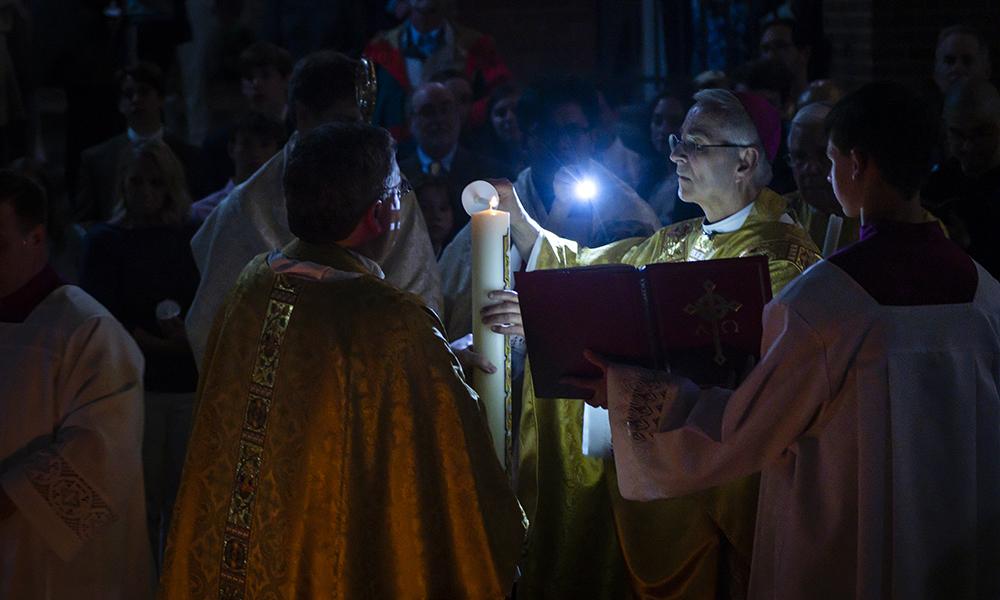 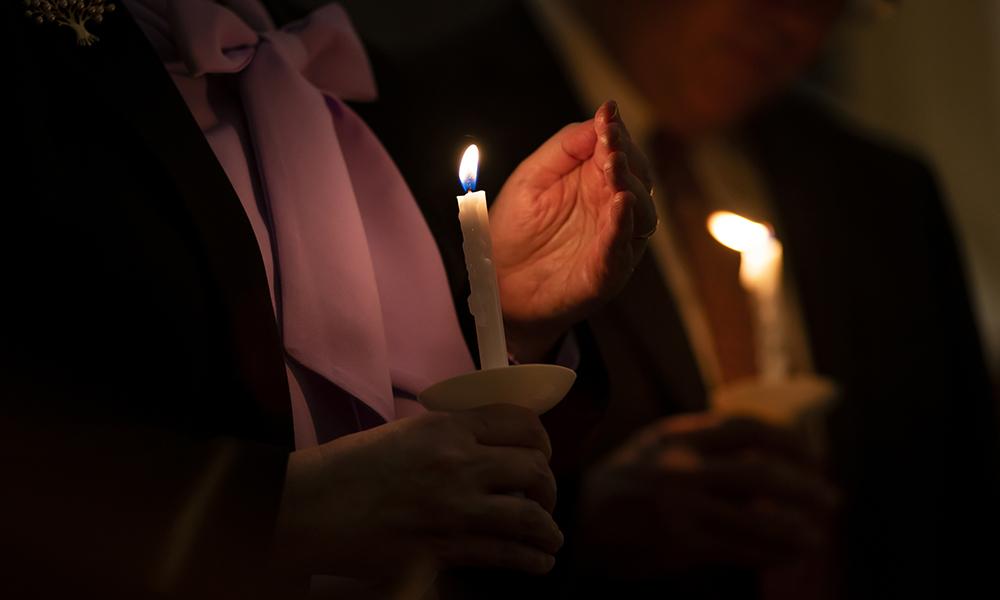 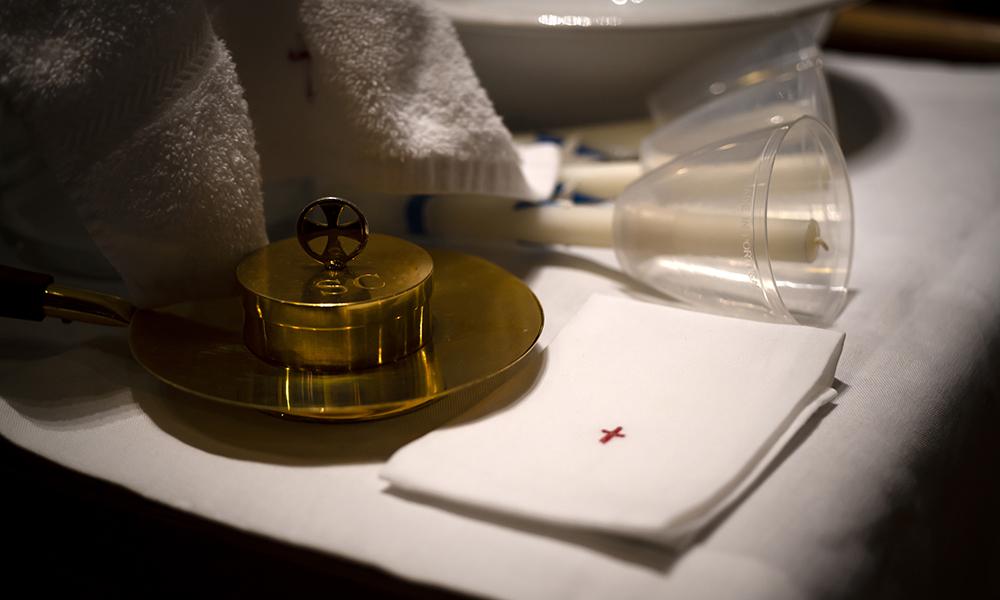 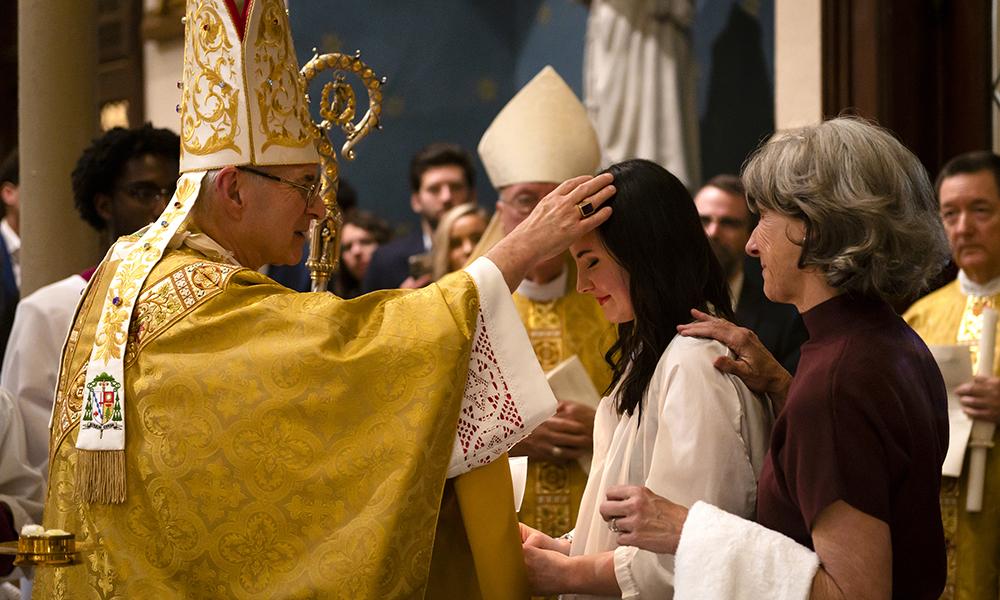 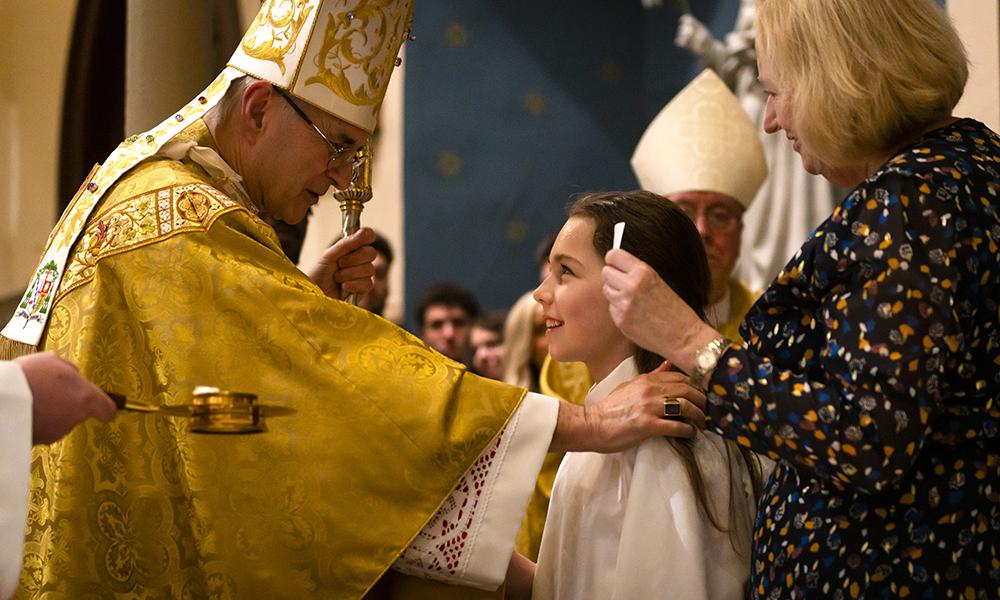 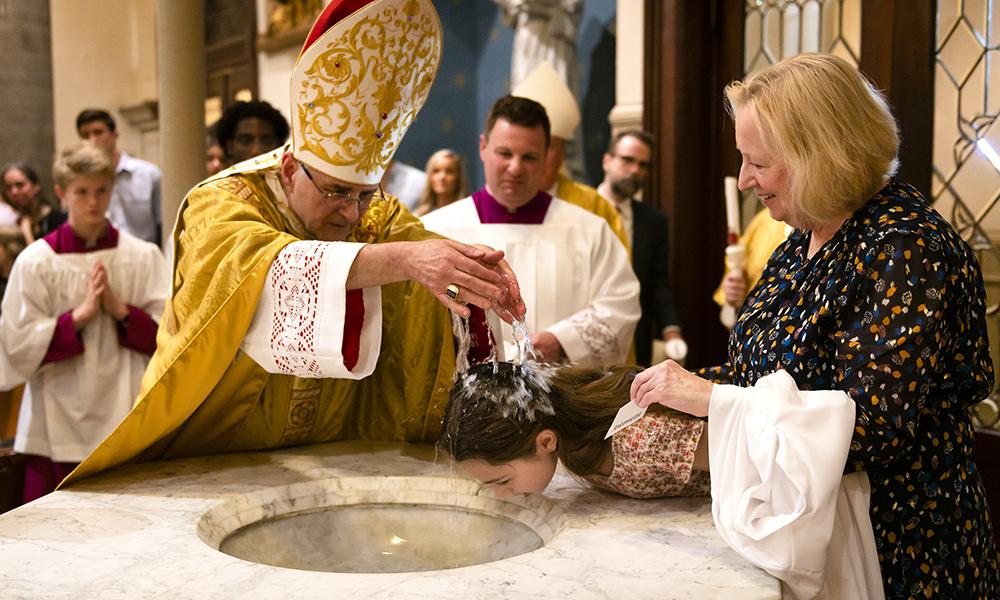