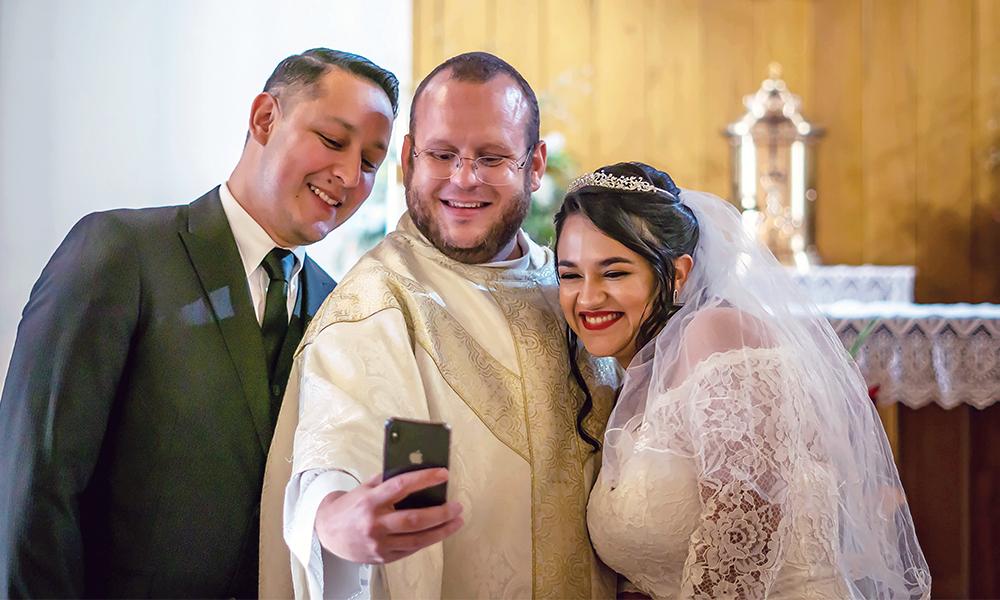 Embracing What God Puts in Front of You

I grew up in Homewood, a suburb of Birmingham, and attended Homewood city schools, where I was in the Patriot Band. I was a lifetime member of Our Lady of Sorrows Catholic Church, where I participated in the youth group. After high school, I went to Auburn University, eventually left, then joined the United States Air Force, where I served one term (2001-2004) as crew chief on a C-17 aircraft. In 2005, I entered seminary for the Diocese of Birmingham after feeling the call from our Lord to serve as a priest.

If it were to be God’s will, I thought all of my experiences — being a practicing Catholic, a member of the youth group as well as my time in college and in the military — had shaped much of who I was and prepared me to go to seminary, study, and one day serve as a priest.

For six years, I studied and discerned the call to serve, and I was ordained a priest by Bishop Robert Baker. I remember being very excited about finally being ordained and all the possibilities God had planned for my life as a priest. The ordination day was wonderful, and after a short trip to Rome as a newly ordained priest, I was sent to my first assignment at Holy Spirit Catholic Church in Huntsville as the associate pastor in July of 2011.

I remember the first day very clearly. I arrived and was greeted by the staff, all except for the pastor, who was in Ireland on his vacation. They showed me to my office and immediately told me that I had work to do. They told me that that weekend there was going to be a Quinceañera Mass, and I had to get ready. I asked them, “What is a Quinceañera Mass?” They told me that it was a blessing of a 15-year old Hispanic girl within the context of a Spanish Mass. I had never prepared for that, but I did it. Then I opened the file cabinet in my office and saw a bunch of files, all in Spanish. Immediately, I started to get that uncomfortable feeling you get when you are in over your head. For the first few months, I was inundated with Spanish-speaking parishioners, and I did not speak Spanish.

Holy Spirit in Huntsville is a large community made up of both Anglo and Hispanic families. At that time, I was the only priest offering sacraments in Spanish for the whole city of Huntsville. It was a bit intense at first. Before I was ordained, I was made aware I would be offering the Mass in Spanish, but I wasn’t aware of just how encompassing Hispanic ministry would be.

My first year, I remember complaining to our Lord. Feeling overwhelmed, I asked Him, “Why did You ask me to be a priest, only to have me minister in a language and a culture which is foreign to me?” I heard His voice remind me that this is where I was needed, and He would be with me if I just trusted Him. I must admit it was difficult at first. I wanted to run in the opposite direction every time someone would ask me something in Spanish or when I would hear confessions, not understanding anything that was being said.

In my discomfort of trying to understand, I had many unanswered questions. “Why do things have to be like this?” “Why do they (Hispanics) do things different than we do sometimes?” If I hadn’t stuck with it, I might have left with those questions, and many more, unanswered. Yet, with a lot of grace, practice, visiting different families, and experiencing different cultures and traditions, my discomfort with Hispanic ministry began to fade. I started to discover a treasure — a treasure which some clergy and lay faithful have also begun to discover. That treasure is the joy that comes with allowing oneself to be immersed in the many beautiful, yet different, cultural and devotional expressions that exist here.

There is such a wealth of love, acceptance, and appreciation I have discovered while ministering to Hispanics. We have families and individuals from several countries south of the United States, and while they may share a common language, they are often very different in what they bring to our melting pot nation and our Catholic identity. From various devotions to different saints, to an absolute love for the mother of God, to novenas for the dead, to processions and frequent family gatherings with different delicious ethnic foods, the similarities and the differences have truly enriched my experience as a priest.

In 2015, I was assigned as pastor of Good Shepherd Catholic in Russellville. About 95 percent of this parish is Hispanic, and yet it is very culturally and racially diverse. It was a challenge at first, especially as a first-time pastor, but after seven years of serving the church, I wouldn’t change it for the world. Good Shepherd in Russellville is a young, vibrant, Catholic community with many families, and we are currently building a new, bigger church to meet the current and future needs of the Catholic population in Franklin County.

While first-generation immigrants often struggle more, their children are already benefiting from the opportunities this country provides, which is a beautiful thing to witness. It is one of the best things about our country — it truly has been, and hopefully always will be, a land of opportunity. As always, there is a little discomfort in confronting people who are different from what we are accustomed to. However, I have learned that if we don’t run from the discomfort, there is so much more to be gained in embracing the beauty which different cultures bring, especially to our universal, Catholic faith.

I now speak Spanish, and to me, that is a miracle. I wouldn’t have imagined that my priesthood would have played out as it has thus far, but again, I wouldn’t change it. I don’t know what the future holds, but I’m not afraid anymore of embracing whatever God puts in front of me. I know that if I do, it will be a blessing, even if it is difficult and challenging at first. That is what my experience with Hispanic ministry has taught me. May God bless everyone in our diocese and may we continue to mutually benefit from all the blessings that come from acceptance and love, embracing our differences as we share and continue to grow in our Catholic faith.

Father Vincent Bresowar is currently pastor of Good Shepherd Catholic Church in Russellville. Previously, he was associate pastor of Holy Spirit Catholic Church in Huntsville and chaplain of St. John Paul II Catholic High School. He currently serves on the Presbyteral Council and the College of Consultors for the bishop and is the Dean of the Northwest Deanery.