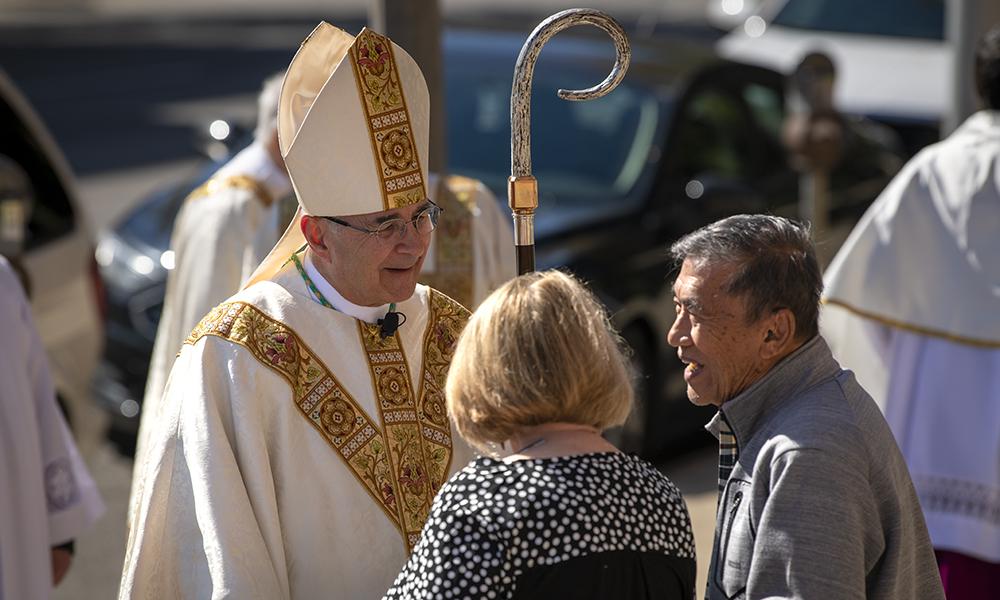 On Sunday, Oct. 23, Bishop Raica celebrated the diocesan White Mass at the Cathedral of St. Paul. The White Mass is celebrated in honor all those in the healthcare profession. The complete text of the bishop’s homily follows herein.

My sisters and brothers, especially caregivers from the medical field, doctors, nurses, practitioners, specialists, technicians, and professors, once again, I add my welcome to each of you who are with us today at the Cathedral of St. Paul in downtown Birmingham. We gather for our White Mass honoring and surrounding in our prayer those in the medical profession. Here in the Diocese of Birmingham the White Mass is typically celebrated near the Feast of St. Luke, the patron of those in medical professions. We add our thanks to those who have embarked on this noble vocation and to pray for divine assistance for your vocation in caring, healing, and bringing comfort and hope to those in need, especially those experiencing physical and psychological distress.

During the past few years, our citizens and hospitals labeled those in medicine as “heroes” among us. Like first responders, you did not duck the challenge of a pandemic, but raced into it headlong to address its complexity while many of us were socially distancing, running for shelter and isolation, and seeking our own security and protection from an unknown threat. Thank you once again for accompanying us, even though there was no clear-cut solution to the dilemmas we faced over the course of these past two years. In hindsight, much of it was trial and error and the best educated guess to help us through a public health crisis. Further in-depth analysis will determine what we got right, what we didn’t, and what lessons we learned going forward.

What we are witnessing today causes some to worry. There seems to be a fashionable view that every human is charting his or her own destiny rejecting what is given. A sound anthropology suggests that our human nature is given us as a gift by our Creator – with all of its joys and struggles. “In the beginning God made them male and female,” our Lord concludes in the Gospel when He tees up the true conception of marriage as it was originally conceived “in the beginning.” (cf. Mk 10:6)

It is easy to reduce everything down to base desires rather than viewing ourselves as the fulfillment of God’s dream in our wholeness, in our entirety, with all of our flaws and weaknesses. The question of individualism and freedom can go in many directions. Nevertheless, our humanity is not reduced to the least common denominator of our base selves or our most recent disease or illness or the latest lifestyle fad. Those with illnesses and debilitations certainly participate in the suffering of Christ. However, we are not defined by them, but by the hope that is present. Through them, and with the promise of Christ to achieve healing, wholeness, and restoration, is part of God’s hope for us. We call it redemption and salvation.

For many of us, we envy those in the medical profession. They are steeped in high level education and science trying to understand the human organism and how it works in its intricate detail. Some witness miracles in the course of treatment whenever someone’s healing is totally inexplicable. They witness the complexity of the individual who is more than a composite of atoms, molecules, and protoplasm, but a person with a soul and a desire for wholeness, completeness, who, with human limitations and imperfections, through grace and mercy, can arrive at an untold satisfaction in the wonder of God’s majesty.

So, yes, we pray for you particularly as you honor the dignity of the human person in its utter amazement. At the same time, we pray that you will see something every day that will awaken the very mystery and wonder of creation before you – a person not defined by their imperfections and disease, but one who’s life has meaning and purpose, not merely utilitarian or functional, whether it’s at the beginning of life or at its natural end. With that in mind, you participate in a mission that is divinely inspired.

If I can say so, as a Christian and as a patient, I love life. I want to live forever! My eyes are set on a future I have yet to imagine. I’m afraid that not even the best doctor can promise a life without end. But, through our baptism, we are given the promise by Christ Himself. With Him, we are given something that we cannot yet totally imagine: life forever. Perhaps that’s why we are here Sunday after Sunday – to remind ourselves of this hope before us and about which Pope Francis, referring to the Church, referred to as a “field hospital.”

The attitude of one before the Mystery is captured so eloquently in the Gospel in the parable between the Pharisee and the publican - two protagonists in this parable. The one dressed in all of his finery, the Pharisee, knew the law inside and out. He was convinced of his own righteousness by saying to God, “Look at all I’ve done for you.” We would call this “pride.” He didn’t need anyone else in his life. He had it all figured out. He even compared his superiority in the faith life to the poor tax collector (the publican) hidden in the corner who was keenly aware of his limitations and shortcomings. “O God,” he begged, “be merciful to me a sinner.” The latter went home justified the Lord concluded. The wisdom of our first reading complements that humility that links us to our creator: “The one who serves the Lord willingly is heard.” And the second reading in which we hear St. Paul echo his dependence upon the Lord, “The Lord stood by me and gave me strength.”

One of the more recent medical figures who has impressed me is in Naples, Italy, Dr. Giuseppe Moscati, who was also a scientific researcher and university professor noted for his pioneering work in biochemistry and for his own personal piety. Every time I go to Naples, I visit his tomb at the Jesuit “Church of the Gesù.” He was canonized a saint by St. John Paul II in 1987. He lived from 1880 to 1927. His primary work was at the “Hospital of the Incurables.” His life was devoted not only to those in impossible situations, but he also helped in the area of public health, performing health inspections when cholera broke out. His own mother died of diabetes. He became one of the first Neapolitan doctors to experiment with insulin in his treatment of the disease.

His writings also are instructive. In one instance he noted, after helping the poor obtain their medications: “The sick are the figures of Jesus Christ. Many wretches, delinquents, cursers, come to the hospital for the availability of the mercy of God, who wants to save them. The mission of the sisters, the doctors, and the nurses is to collaborate with this infinite mercy, helping, forgiving, and sacrificing themselves.”

That is the noble task before you every day: “To collaborate with this infinite mercy.” It’s a noble one because it is oftentimes in illness that divine and human realities touch. We see our human flaws but also the image of the divine reality right before our eyes.

Through the prayers of St. Luke, St. Giuseppe Moscati, and others, may your mission here be one filled with wisdom and understanding, as you foster an ever-deeper relationship between patient and caregiver with whom our faith is a source of strength. May God bless you all!