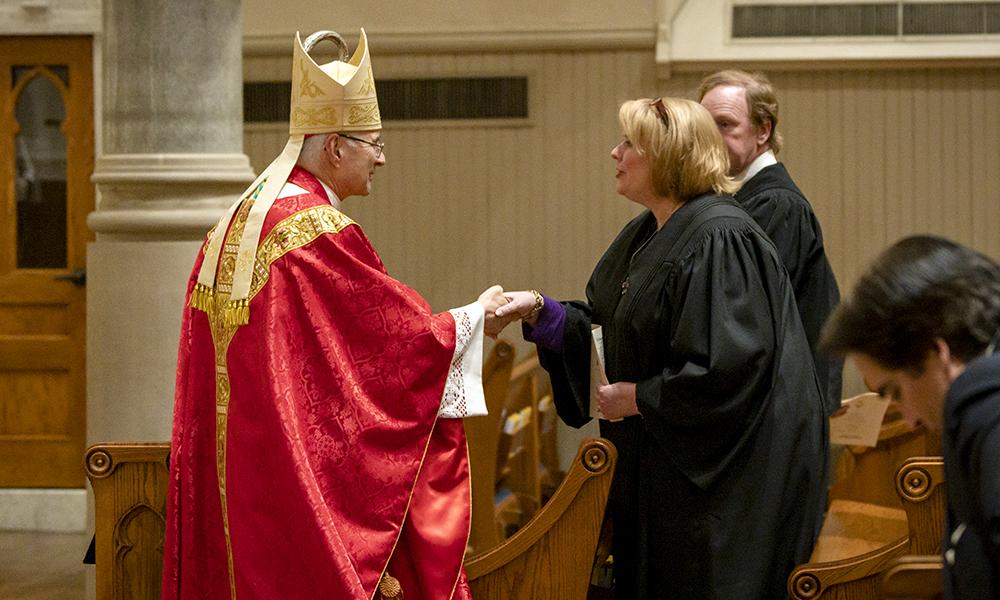 On Thursday, Oct. 20, Bishop Raica celebrated the diocesan Red Mass at the Cathedral of St. Paul. The Mass is said in honor of all those working in the legal profession. The complete text of the bishop’s homily follows herein.

My dear friends, honorable Justices, attorneys, law professors and students, and distinguished guests, tonight, we gather for our annual Red Mass here in the Diocese of Birmingham at the Cathedral of St. Paul here in downtown Birmingham. I’m grateful for this opportunity to be with you who have come from near and far this evening. The Red Mass stands historically as one of the great events of the judicial year, invoking through the prayers of this Holy Mass, the gifts of the Holy Spirit on the vital work of the court in its pursuit of truth, justice, fairness, honoring the dignity of those persons who find themselves before the judge’s bench. Your work, after all, is a participation in the divine work of judgement in so far as it is based in the laws of nature and the creator of this reality which imposes itself upon us. Each person trusts that in the pursuit of peace and reconciliation among peoples, the search for justice, of giving to each one what is his or her due, must prevail in order for the good of the public in the attainment of peaceful and just relations with one another.

This evening, we come as judges, lawyers, professors and students of the law, law clerks, and those assisting with the civil order along with canon lawyers who assist in the judicial and administrative aspects of the ecclesiastical society, and many others, who in the performance of their duties, help to bring fairness and equity to the questions that they have to face. Whether the questions pertain to the status of persons, the prosecution of a crime, or the vindication of rights, all are in the pursuit of the truth that concords with reality. Yet, all the work of the judiciary can be centered on the recognition of the sacredness of human dignity.

Just a few months ago, our Holy Father, in speaking to judges and the judiciary in Italy, reminded them that the administration of justice was weighed differently throughout history: “according to merit, according to need, according to ability, according to usefulness.” Above all, the recognition of human dignity as sacred and inviolable is at the heart of laws that emanate from natural law or laws that are positively determined by legislators.

Last year, I mentioned the figure of lady justice, a blindfolded woman holding balance scales and a sword as a sort of allegory expressing equality before the law, the weighing of proofs according to jurisprudence, and impartiality, yet modulated to require the application of mercy in certain concrete situations. Perhaps this is the equity about which we often speak today. Some of its taproots go back to Cardinal Hostiensis, Henry of Susa (+1271): “aequitas est iustitia dulcore misericordiae temperata” (Henrici Cardinalis Hostiensis Summa Aurea. Lib. V. tom. De dispensationibus. N. 1, Lyon 1556, p. 430vb).

In our readings today, we are reminded of this equity in the sobering story of the Good Samaritan. He’s the one who went outside of his own cultural norms and dictates to aid an unfortunate along the side of the road. Others, including a priest who passed by, ignored the pleas of the one in need, refusing even to draw near or cast an eye. The one recognizing a fellow human being as neighbor was the one who was alien to the man.

Today, we also look at ourselves, invoking the aid of the Holy Spirit, especially the gifts of wisdom, understanding, knowledge, and courage to give witness to a deeper truth encapsulated in the work that is accomplished through the law and through the processes of justice.

At this Red Mass today, within the scope of the work that is before you, I pray that these elements and factors may contribute to the spirit of the laws that you uphold, especially those articulated constitutionally as inalienable – life, liberty, and the pursuit of happiness.

Finally, I point out a more contemporary example in a Catholic judge in Sicily. It is the example of Blessed Rosario Livatino who was brutally assassinated by the mafia in Sicily in 1990. He is quoted as saying, “When we die, no one will come and ask us how much we were believers, but believable.” “Livatino,” noted Pope Francis recently, “was murdered at the age of 38, leaving us the strength of his credible testimony, but also the clarity of an idea of a judiciary to which to strive.” While we often refer to St. Thomas More, as Chancellor of England, and his utter respect for conscience, as a patron saint of lawyers, Bl. Rosario Livatino, a martyr of justice and faith, is believed to be the first magistrate beatified in the history of the Church. A true contemporary who was about my age, having been born a month before me on October 3, 1952. In his journal on July 18, 1978, the day he became a judge, the 25-year-old wrote: “I took an oath. From today, therefore, I am in the judiciary. May God accompany me and help me to respect the oath and to behave in the way the education my parents gave me requires.”

After his death, a Bible, which he considered “a chest, a treasure full of values,” was found on his desk filled with notations, where he always kept a crucifix.

In 1986, he gave a lecture at a conference about the relationship between biblical law and the history of human law. “The value of biblical law is immense in the heritage of human culture and especially juridical: every juridical message that is not strictly linked to historicized customs and needs has the imprint of a premonitory sign in biblical law,” he noted.

A fellow classmate of his quoted St. Ignatius of Antioch (+108AD - 140AD) who astutely observed: “He educates well with what he says, he educates better with what he does, he educates even better with what he is.” Blessed Rosario obviously touched the laborers of justice not only in knowing the law and its rigor, but applying it with a sense of equity (i.e., “justice tempered by the sweetness of mercy”). May Blessed Rosario pray for us today throughout the Diocese of Birmingham and be a continuing inspiration for those who love truth and the pursuit of justice and peace. May God bless you all! 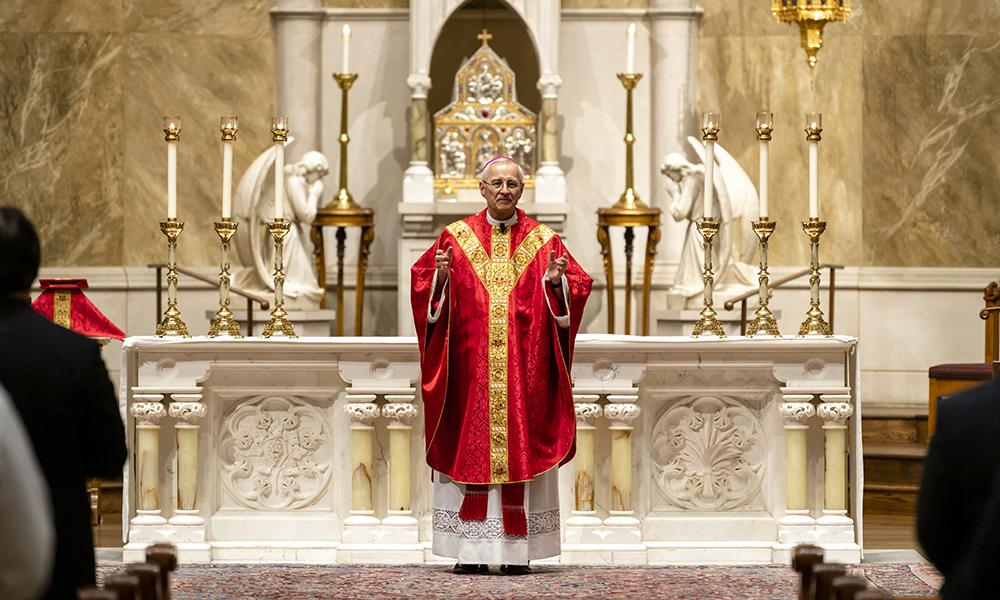 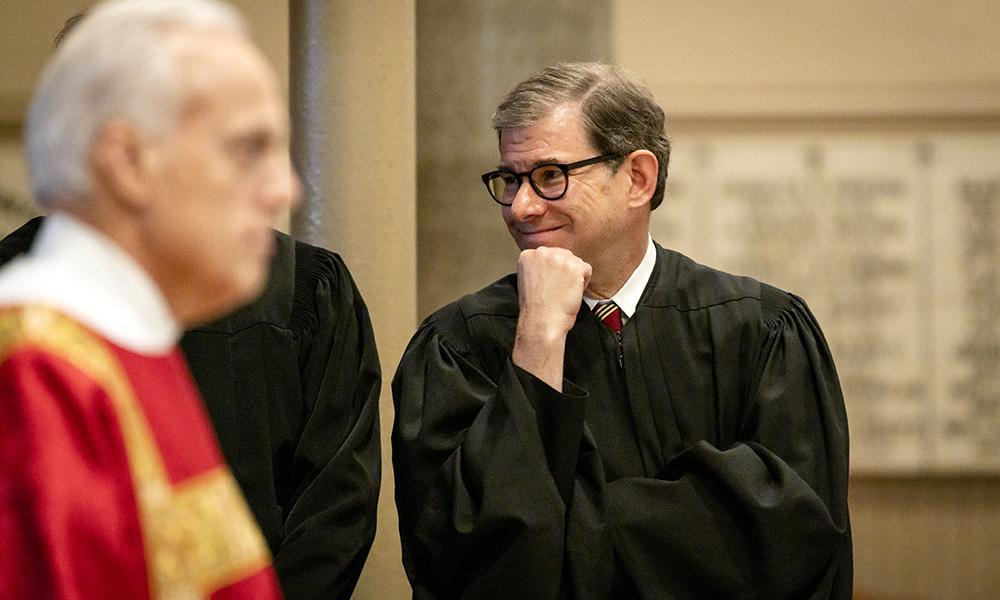