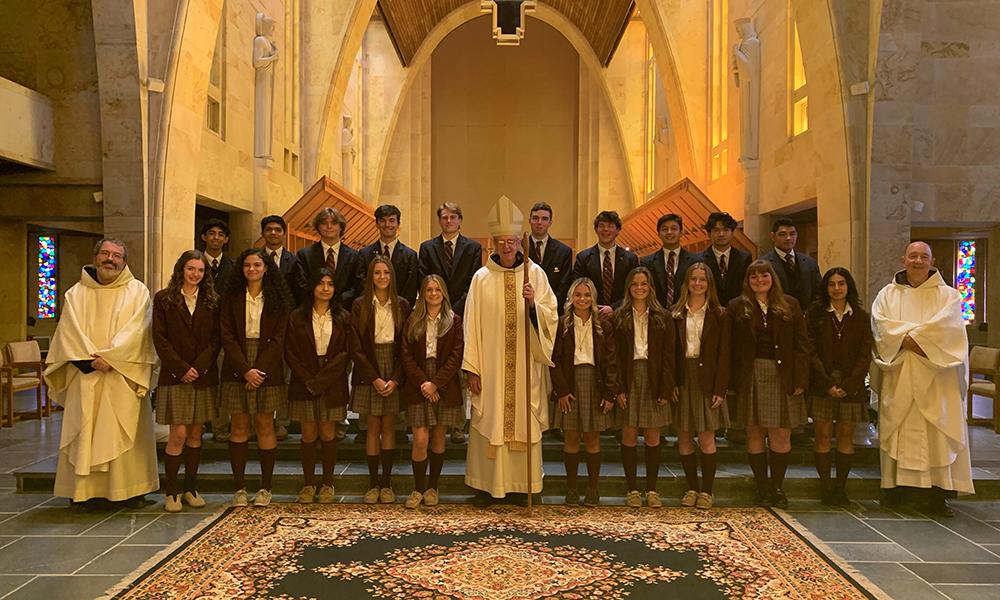 St. Bernard seniors, the Class of 2023, were honored on Sept. 29 with a special Senior Dedication Mass, recognizing them as leaders of the student body of St. Bernard Prep.

Giving the homily at the celebration, Abbot Marcus Voss, O.S.B., explained that all were gathered to celebrate for three main reasons. The first was the feast day of the great archangels: St. Michael, the chief of all the angels, the army of God; St. Gabriel, the great messenger and patron saint of telecommunication workers, radio broadcasters, and postal workers; and St. Raphael, the healer, and patron saint of travelers, the blind, nurses, pharmacists, physicians, and people who are ill. Secondly, the twelve monks who, on Sept. 29 in 1891, founded St. Bernard Abbey and walked in procession on that day from the city of Cullman to the forested, brush-covered stretch of land to build a monastery. Lastly, the abbot stated that 131 years after the monks walked in procession to start a new monastery, those present were there to celebrate the Class of 2023.

“Seniors, you set the standards for our school,” Abbot Voss continued. “You are the example. You provide leadership and set the tone for the environment of the school just like the angels, as did the first monks did when they dedicated their lives to follow God and lead others to Him.

Headmaster Father Joel Martin, O.S.B., along with Abbot Voss and School Chaplain Father Linus Klucsarits, O.S.B., presented each senior with a cross and encouraged them to wear it “with wholesome pride, as a reminder of the privilege and dignity that are yours because you have been called to share in Christ and receive an education that is centered on Him.”

Following the abbot’s homily, the faculty and staff joined the seniors before the altar as a sign of their support of them. They concurred with the request that the seniors should receive the abbot’s blessing to assist them in taking on their role of leadership within the student body. Natalie Garcia, senior class president, assured those present that the seniors willingly accepted the responsibility given them. Other senior class officers assumed principal roles in the celebration: Vice President Charles Gil, Secretary Margaux Richards, Treasurer Xavier Pautler, and Representative to the Student Council Ashley Morris.