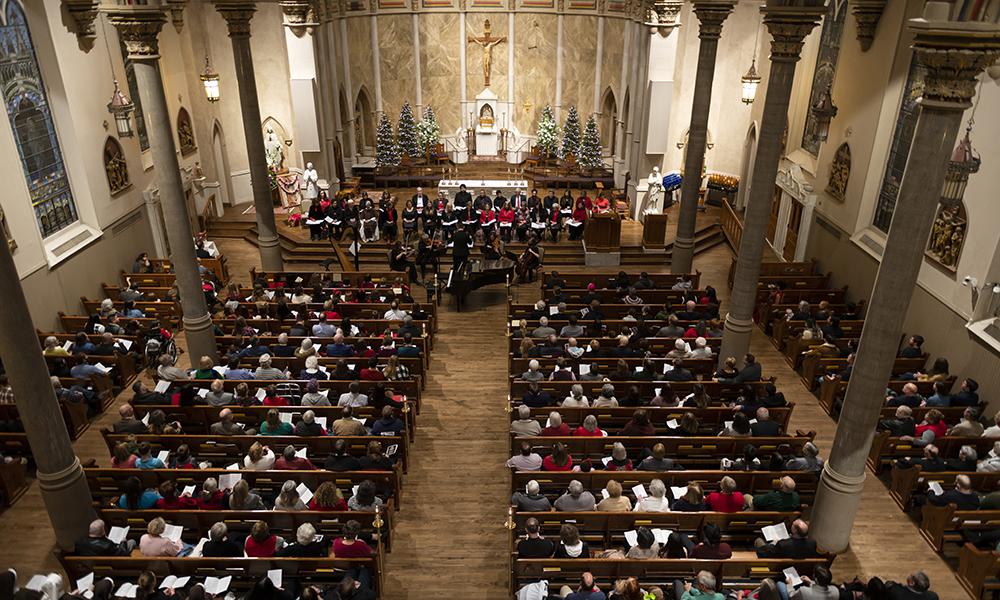 Diocese Presents the First Annual Christmas at the Cathedral Concert

On Gaudete Sunday, the Cathedral of St. Paul was filled with the roaring sound of the magnificent new organ joined with the voices of those packed in the pews of the Cathedral singing “The First Noel.” The occasion was the first annual “Christmas at the Cathedral” concert. Afterward, Francisco Carbonell, diocesan music director, elatedly said, “I confess, it was one of those moments of which every music director dreams!”

The evening marked the culmination of several months of hard work in the form of practices and preparations. All the individual efforts locked into place to form what made a beautiful mosaic of the sacred music of the season. With a very diverse and captivating program, hearts were touched in many ways. Melodious chords from the harp, the brilliance of the organ, the warmth of the strings and exquisite voices of the young and old all captivated the attention of those present anticipating the coming birth of Christ in a new and powerful way.

Carbonell expressed his appreciation to the standing-room only crowd who turned out to enjoy the concert. In addition, he said: “I would also like to express my sincerest appreciation to all those who participated in this program. Without these very talented artists, especially the members of our newly established Diocesan Choir, this program simply would not have been possible!”

Since Carbonell arrived as music director, many exciting things have taken shape.

“I reflect fondly,” he said, “on the many wonderful educational and liturgical opportunities that we have had including the outdoor Mass for the Eucharistic Conference in Hanceville, the very successful Sacred Music Convocation at St. Bernard Abbey, and now we have added ‘Christmas at the Cathedral’ to the list.”

Looking ahead, he said many “exciting projects” were already in the works for 2022.

Carbonell conveyed his desire to have opportunities for growth and education in order to provide music for the diocese’s most important celebrations. “I would like to extend a very warm invitation for you to be a part,” he said. “We have both Birmingham and Huntsville divisions which rehearse (bi-lingually) regularly and then come together for major events.”

Similar to the Diocesan Choir, Carbonell is also forming a Diocesan Instrumental Ensemble for musicians throughout the diocese who play instruments. This ensemble will also play for major diocesan celebrations.

“We have many exciting things going on and I hope that you will consider being a part of this free opportunity,” Carbonell concluded.

For more information or to sign-up for either the Diocesan Choir or the Diocesan Instrumental Ensemble, please do not hesitate to email Carbonell at fcarbonell@bhmdiocese.org.