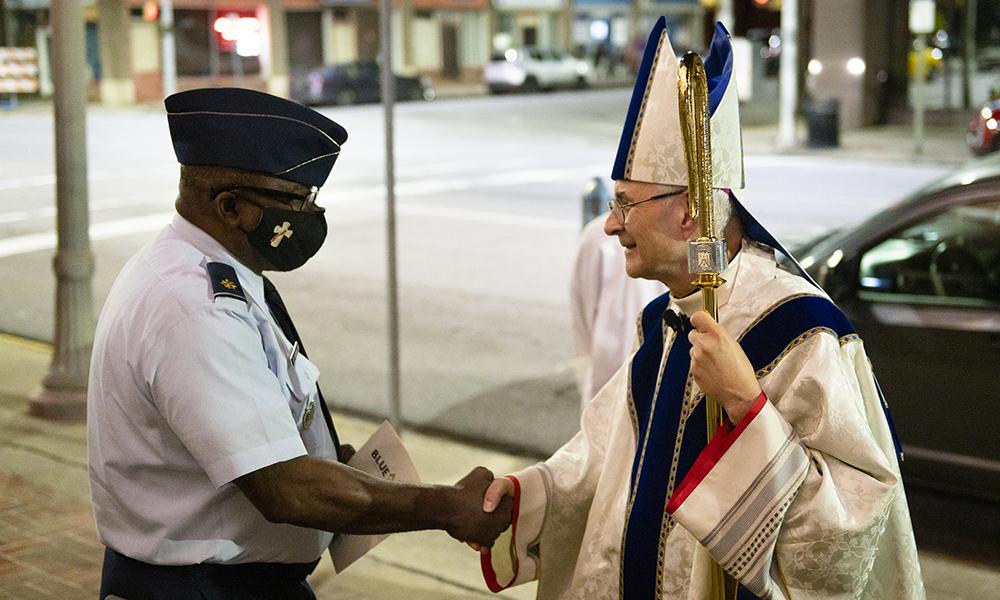 Annually the Diocese of Birmingham celebrates various “color” Masses. Each color is representative of a certain profession. The most familiar of these Masses is the Red Mass. It has been celebrated in the diocese for many years. The Blue Mass, however, began in 2016, with the White Mass being added not too long after. Last year, Bishop Raica celebrated the first ever diocesan Gold Mass. What do all these colors signify? Let’s take a look.

The tradition of a Red Mass can be traced to 13th century England, France, and Italy. The Mass was, and continues to be, one during which the Holy Spirit is called upon to offer divine guidance for all who seek and administer justice, traditionally those serving in the branches of government and member of the legal profession. In addition to the invocation of the Holy Spirit, the Mass acquired the color red due to the red robes worn by judges of the High Court in England.

In the Diocese of Birmingham, the Red Mass is usually held around the beginning of the judicial year in October and is sponsored by the St. Thomas More Society. This year, the diocesan Red Mass will be celebrated at the Cathedral of St. Paul on Thursday, Oct. 20 at 6 p.m.

Within the United States the tradition of the White Mass has a history of almost 100 years, which can be traced back to the beginnings of the national Catholic Medical Association. Aptly named for the workers and their traditional color of white, the White Mass gathers all those working in the healthcare profession under the patronage of St. Luke, asking for God’s blessing over them and the ones they serve.

In the Diocese of Birmingham, the White Mass is usually held either on or close to the feast of St. Luke. This year, the diocesan White Mass will be celebrated at the Cathedral of St. Paul on Sunday, Oct. 23, at 11 a.m.

The Blue Mass, like the White Mass, is a tradition of almost a century. In 1934, a priest of the Archdiocese of Baltimore, Father Thomas Dade, formed the Catholic Police and Firemen’s Society, which sponsored the first ever Blue Mass in that same year. Named for the traditional blue uniforms of law enforcement, a Blue Mass is celebrated in honor of those employed in public safety: police, firefighters, and all first responders.

In the Diocese of Birmingham, the Blue Mass will be celebrated in two different locations: the Cathedral of St. Paul in Birmingham and St. Mary of the Visitation Catholic Church in Huntsville. The former will take place on Sunday, Oct. 2 at 11 a.m. and the latter will take place Wednesday, Oct. 12, at 11 a.m.

The Gold Mass is the newcomer to the “color” Mass scene. As a way to create spiritual fellowship among Catholic scientists, the Society of Catholic Scientists used the tradition to advocate for Gold Masses to be celebrated throughout the country. The Mass brings together all those working in scientific fields as well as educators and students and is usually celebrated on or near the feast of St. Albert the Great, patron saint of engineers.

This year in the Diocese of Birmingham, the Gold Mass will be celebrated by Bishop Raica at the Cathedral of St. Paul on Sunday, Oct. 30, at 11 a.m.