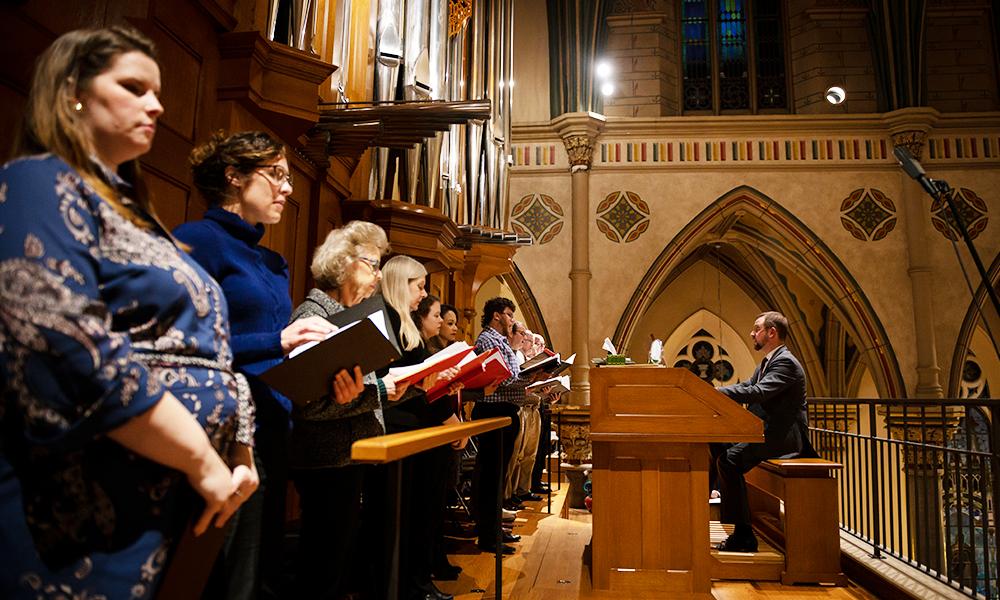 Proclaiming the Glory of the Father, the Son, and the Holy Spirit

On Dec. 8, a years-long project at the Cathedral of St. Paul came to completion with the dedication of Noack Organ Company’s Opus 164, the Anna Catharine Grace Memorial Pipe Organ.

According to Bruce Ludwick, Jr., the cathedral’s director of music, “Providence seemed to guide every step of the process.” Following the previous instrument’s failure, the search for a replacement began. Thanks to a long-time benefactor of music in the Diocese of Birmingham, the late Anna Catharine Grace, a large sum of money was available to partially fund the project. Several organ building companies presented proposals, but the “thrilling proposal” from Didier Grassin, president of Noack Organ Company, that “envisioned an organ rooted in the French organ building school of the 18th century, with elements ranging from that era to the present day” stood out to Ludwick and Father Bryan Jerabek, pastor and rector of the cathedral.

Other benefactors came forward, providing the funds necessary to craft an organ with “one foot in the old world and another in the new” and designed “to proclaim the glory of the Father, the Son, and the Holy Spirit.”

“The instrument,” Ludwick said, “uses Old World craftsmanship and some voicing techniques that are seldom found outside of France.” To accomplish this feat, Grassin employed the help of his team of craftsmen and organ builders, among whom included Nami Hamada, voicer and finisher. Grassin also called upon a long-time friend, Bertrand Cattiaux of Atelier Orgues Cattiaux, the firm which maintains the organs of Notre-Dame-de-Paris, among others.

The three are internationally renowned in the worldwide organ building community for their experience and skill in crafting pipe organs that bring to life and preserve the sounds of 17th-20th century France.

Their craftsmanship, Father Jerabek remarked, has given the Diocese of Birmingham the blessing of “sustained and amplified” divine worship for “generations to come.”

Grassin was born in Poitiers, France. The local cathedral houses an 18th century organ “known around the world for the quality of craftsmanship and amazing sound.” When he first discovered the instrument, he confessed it was, and continues to be, “a source of awe.”

Trained in a variety of European workshops, he led the drawing office at Mander Organs in the United Kingdom, spent several years as a freelance designer, then became director of the tracker department for Casavant Frères. He has designs that can be seen in England, France, Japan, Malaysia, New Zealand, China, Canada, and the United States. After 25 years of experience, Grassin joined the Noack Organ Company in 2011 and became president four years later following the retirement of the founder, Fritz Noack.

“We do not really have titles in our workshop,” Grassin asserted. “I am officially the president and owner, but the title which I have always aimed for in this profession is ‘facteur d'orgues,’ translated as ‘organ builder.’”

For Grassin, organ building means a great deal more than just building a machine. “Organs often are measured in numbers — how many keyboards, how many pipes, how tall. While organs are machines, they are also vectors for music and, as such, are artistic creations. Their success rests on the craftsmanship and expertise of artisans that have been carrying their traditions for centuries. It is both humbling and exhilarating. This really cannot be quantified. Organs are quite unique among musical instruments in being tailor-made for a special space. That space is often a sacred space where a community worships. [In that space, the] organ becomes much more than a simple machine, it also carries the voice of the people.”

The privilege of carrying on the tradition of organ building brings a smile to Grassin’s face. “So many things make me happy,” he said, “the fact that organs are at the cross-way of engineering and art, the chance to work with incredibly talented craftspeople, the thrill of manufacturing a complex machine from the raw material all the way to the finishing touches, the pride of carrying on a long tradition …”

To the faithful of the Diocese of Birmingham, Grassin expressed gratitude on behalf of his employees, “The donors of the organ made a gift not only to the worshipers of today but to the many generations of worshipers who will come to this cathedral long after we are all gone. The building of this organ has allowed an ancient craft to be continued and passed to another generation of artisans.”

Bertrand Cattiaux was born in Étampes, France, near Paris. As a child, he expressed an interest in music. That interest, however, became something more at the age of 14 when he opened the back doors of the organ of Notre Dame d'Étampes. The “fascinating world of pipes, wood, and mechanics”     led him to discover his “vocation” as an organ builder.

Cattiaux would go on to train under Jean-Loup Boisseau. In 1980, he would partner with Boisseau and complete over 30 restorations, which included the organs of the Basilica of Saint-Denis, Notre-Dame de Paris, the Cathedral of Saint-Pierre in Poitiers, the Basilica of Saint-Sernin in Toulouse, and the Royal Chapel of Versailles.

In 1998, Cattiaux formed a new workshop, the Atelier Bertrand Cattiaux. Throughout France, Cattiaux and his team built and restored organs such as the organ of the Basilica of Saint-Remi of Reims. His expertise in design and voicing has gained him an international reputation. In recognition of Cattiaux’s contributions to French culture, he has received awards of distinction in France’s Ordre des Arts et Lettres  and Ordre National de Mérite.

After handing over the reins of his workshop to a successor in 2019, Cattiaux began work as a consultant, opening the door to a wider range of opportunities.

“Thanks to the beautiful acoustics of the cathedral,” Cattiaux explains, “this organ sounds glorious. Its French voices can bloom in a particularly successful manner. Its mechanism, or key action, is perfectly adapted to serve the tonal palette of this instrument. It was a great pleasure to collaborate in the voicing of this organ.”

At the young age of 14, Nami Hamada began taking organ lessons at her junior high school in Tokyo. “Growing up in a traditional Buddhist family, I was fascinated by both the philosophy of Christianity and the organ music,” she remembers. “The more I studied, the more interested I became in the construction of the instrument, which later made me decide to become an organ builder.”

After attending Ferris University in Japan, she studied organ performance under Yuko Hayashi at New England Conservatory in Boston. Graduation was followed by a tryout offer from C.B. Fisk Organbuilders in Gloucester, Massachusetts. For 19 years, she “learned all of the basic organ building skills from wood working, pipe making to voicing.” During that time, she also had the opportunity to work with John Brombaugh on his last major instrument in Japan and with Bertrand Cattiaux in France. In 2018, she joined Noack Organ Company.

Like Grassin, Hamada’s profession offers a long list of things which bring her joy, one being the moment when people in the congregation start hearing the sound of the new organ. “A lot of their faces light up, some turn around with a smile, children stare … and, best of all, singing starts to change.” Over the course of a few months, Hamada says voices start to have “a joy in them.” “That is the moment,” she exclaims, “when this profession brings me a great joy and reassures me why I want to do what I do.”

Hamada feels strongly about doing her part to “offer the best quality music to every single person, no matter who they are.” Quality music is beautiful, and beautiful things touch, inspire, encourage, and comfort. “It has been my great joy to be part of creating something that makes all of our lives richer, deeper, and happier.” 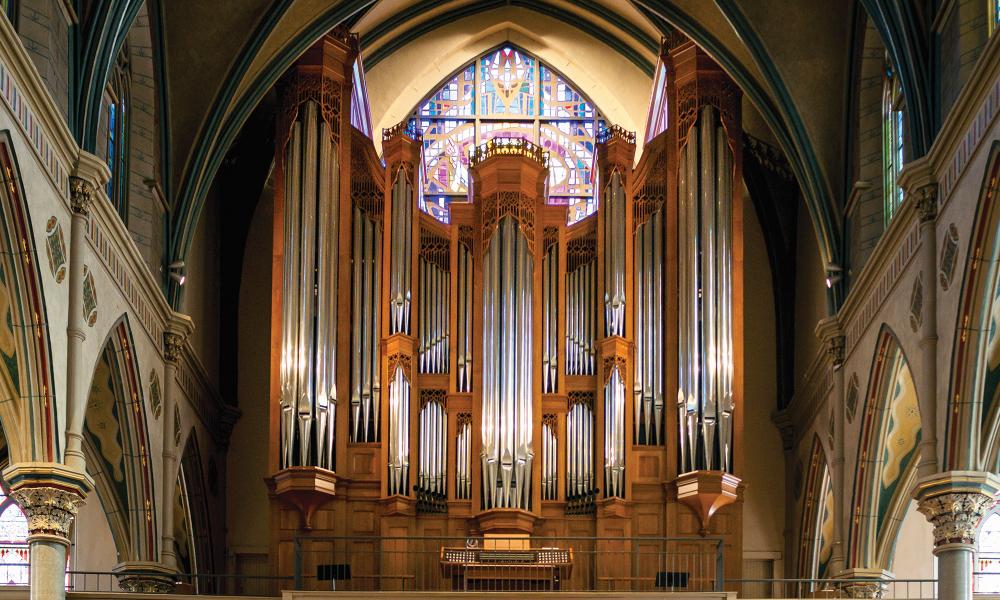 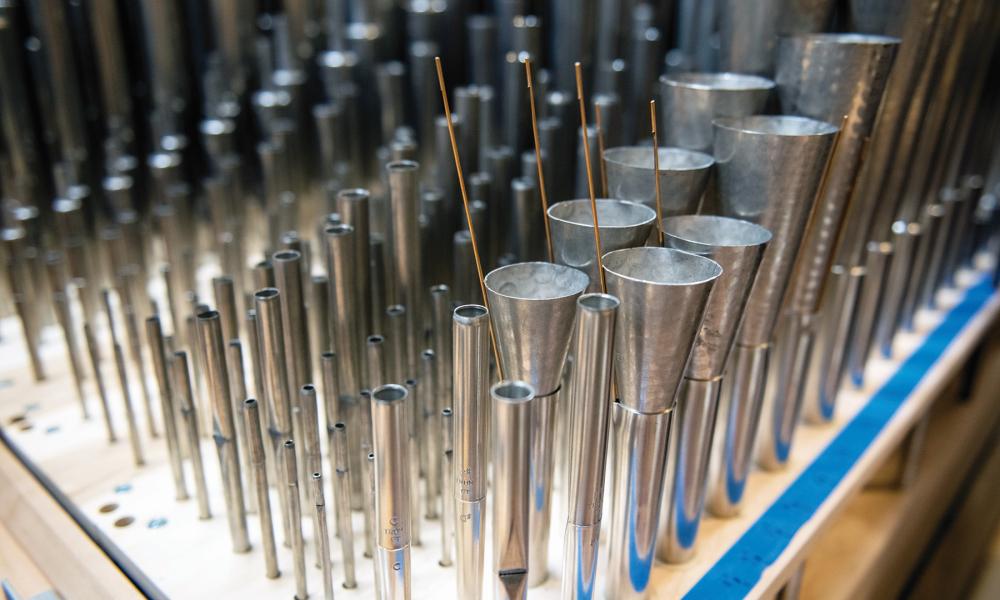 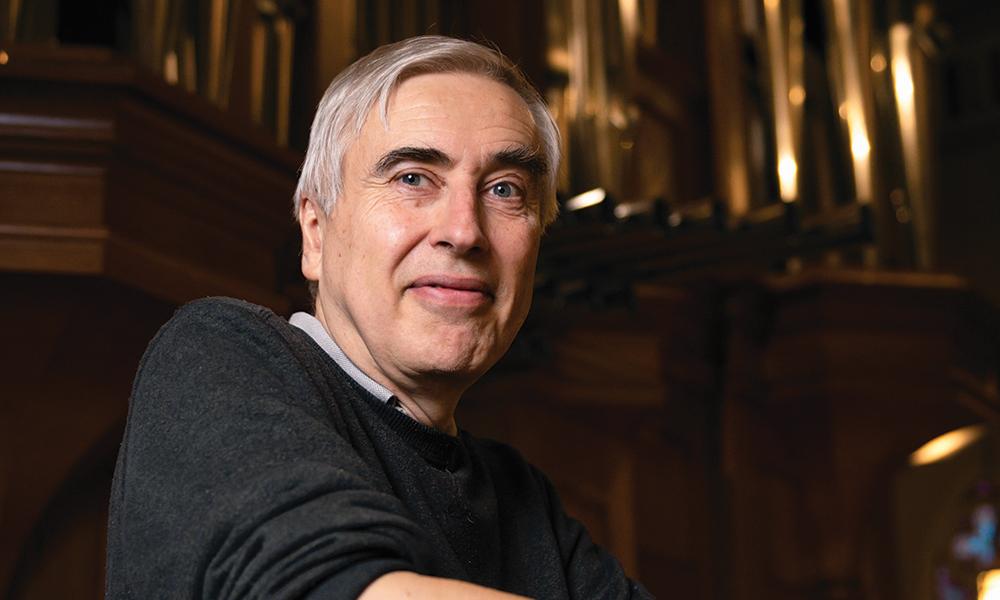 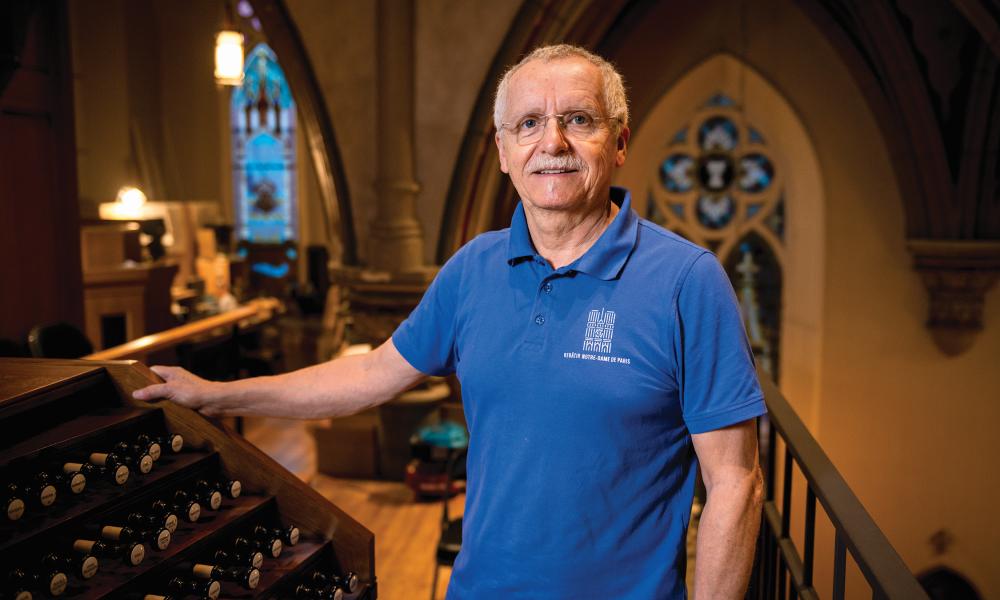