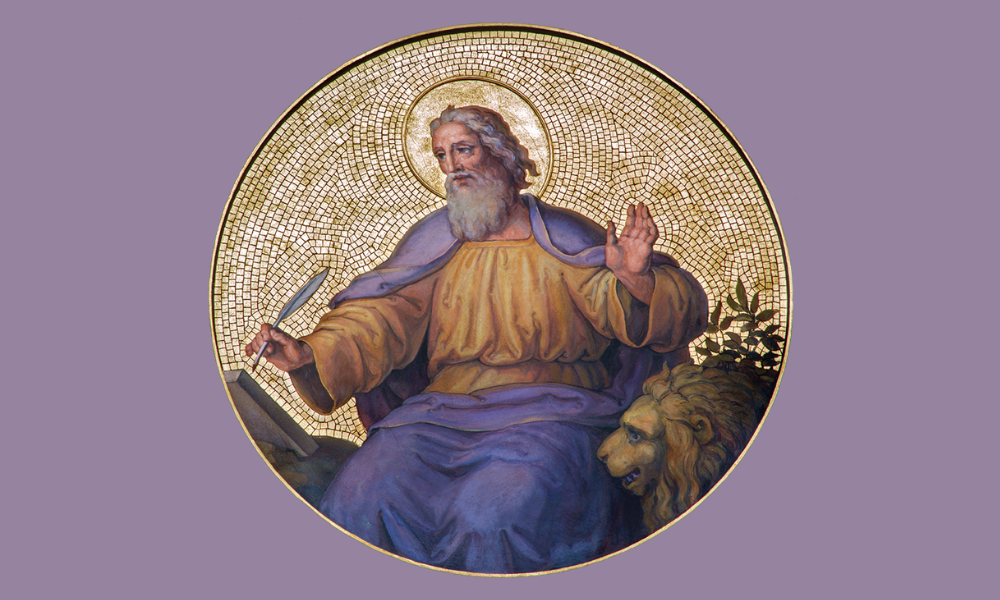 A Missionary, a Disciple and a Bishop

In order to provide a deeper context for the drama of salvation that sacred Scripture communicates to us, Theology 101 is taking a closer look at the four evangelists. Read about St. Mark below.

Peter thus was being kept in prison, but prayer by the church was fervently being made to God on his behalf … Suddenly the angel of the Lord stood by him and a light shone in the cell. He tapped Peter on the side and awakened him, saying, “Get up quickly.” The chains fell from his wrists … Then Peter recovered his senses and said, “Now I know for certain that [the] Lord sent his angel and rescued me from the hand of Herod and from all that the Jewish people had been expecting.” When he realized this, he went to the house of Mary, the mother of John who is called Mark, where there were many people gathered in prayer. (Acts 12:5, 7, 11-12)

The reality is that we know very little about author of the Gospel of Mark. Mark, who is also known as John, is mentioned only a few times in the New Testament. However, these passages paint a portrait of this important evangelist.

Both Colossians (4:10) and Acts (15:37) indicate Mark was a missionary with St. Paul and Barnabas, who was Mark’s relative. Mark journeyed with both Barnabas and Paul on their first missionary trip, which was to Antioch in present-day Turkey. However, Mark left them when they arrived at Perga in Turkey and returned alone to Jerusalem.

As Paul and Barnabas prepared to set out on their second missionary journey, Barnabas lobbied Paul to give Mark another chance. However, Paul refused to allow Mark to rejoin the team. This drove a wedge between Barnabas and Paul, and they separated. Barnabas sailed to Cyprus with Mark instead (although some scholars question the description of the break between Paul and Barnabas in Acts as it seems to be at odds with Paul’s account in Galatians). In the end, the rift between Mark and Paul did not last. Scripture suggests he remained a valuable associate of Paul, and Paul specifically asks for Mark when he is in prison in Rome.

The New Testament also implies that Mark had a close friendship with Peter. In the above passage from the Book of Acts, we learn that St. Peter immediately visited the house of Mark’s mother in Jerusalem upon escaping prison. Scripture also suggests that Mark was a companion, disciple and interpreter for Peter. In fact, Peter even refers to greetings from “my son Mark” in 1 Peter 5:13. Tradition holds that Mark was baptized by Peter and suggests Mark accompanied Peter to Rome, where he wrote his Gospel. One Apostolic Father, Papias of Hierapolis, held that Mark’s “treatise” was based on Peter’s preaching and teaching about Jesus, which is why this Gospel pays special attention to the head of the apostles.

Mark’s Gospel is the shortest of the four Gospels. While some scholars argue the Gospel of Matthew was written first, most consider the Gospel of Mark to be the earliest since it was composed sometime before 70 A.D. when the Temple in Jerusalem was destroyed by the Romans. His Gospel was written for Roman Gentile converts. Perhaps for this reason, Mark rarely quotes the Old Testament and takes special care to explain Jewish customs, rites and words. While it presents the life of Christ chronologically, Mark goes to great pains to highlight the emotions and feelings of both Christ and those who hear him. The Gospel writer emphasizes humanity’s rejection of Jesus and gradually reveals the scandal of a crucified Messiah.

Unsurprisingly, we know very little about Mark’s later life. He died a martyr’s death while serving as the bishop of Alexandria in Egypt. The Egyptian Church views Mark as its founder and the see of Alexandria has been called “the chair of Mark” since the 4th century A.D. His relics were later transferred to Venice, Italy. His feast day is April 25.

A prayer to St. Mark

O Glorious St. Mark, through the grace of God our Father, you became a great Evangelist, preaching the Good News of Christ. May you help us to know him well, so that we may faithfully live our lives as followers of Christ. Amen.

St. Mark the Evangelist is often portrayed as…

B. A winged ox

Answer: C – A winged lion. The winged lion is a multi-faceted symbol. For example, St. Mark described John the Baptist’s voice “crying out in the wilderness.” This voice is reputed as having sounded like a roaring lion. Mark also presents Christ as the unconquered King, symbolized by a lion. In addition, the symbol factors into the vision of the Prophet Ezekiel (Ez 1:10) and in the Book of Revelation (4:7), both of which refer to the four evangelists.

A Venetian tradition relates that an angel appeared to Mark when he was resting at a lagoon in Venice. The angel said to Mark, “Pax tibi Marce, evangelista meus. Hic requiescet corpus tuum” (“Peace be with thee, O Mark, my evangelist. Here thy body will rest”). Mark, of course, left Europe, returning to Alexandria in Egypt to found a Church and serve as bishop. However, Mark’s remains were stolen from his tomb in Alexandria by two merchants and brought to Venice in 828 A.D. in a seeming fulfillment of the angel’s prophetic words. Mark has been the patron saint of Venice ever since.

Doug Culp is the delegate for administration and the secretary for pastoral life for the Catholic Diocese of Lexington.