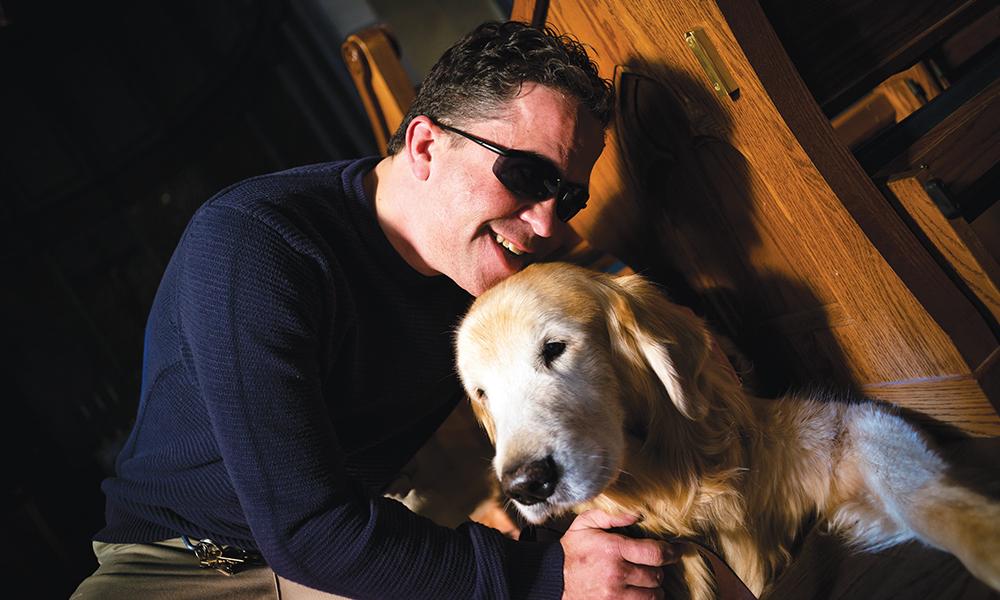 Man’s Best Friend, a Prayer, and an Open Heart

A Leap of Faith Blazed by Lenny, The Seeing-Eye Dog

On an August morning in 2016, Shannon George, a Social Security Administration employee, woke up two hours late for work. Rushing to get ready, he realized he didn’t have his debit card. “This was before Uber,” George remembers, “so I knew I was going to have to walk to work.”

Walking to work was not all that unusual, especially for George, but his journeys were not solo ones. Having been born with glaucoma that steadily worsened into adulthood, he had been matched with Lenny, his seeing-eye dog, in 2010. Lenny had been patterned to take him to the office, but due to Lenny’s age, George decided to take a shorter route. The two traveled along 22nd Street in downtown Birmingham. As the two crossed 3rd Avenue, North, Lenny became fixated on something while the two were in the middle of the street. “He could not take his focus off [what he was looking at]” George says. The duo had to cross over 22nd Street in order to continue on 3rd Avenue, but just like the previous crossing, Lenny was distracted. He wasn’t focusing on the traffic, even after being given the command to ignore whatever it was that was mesmerizing him. “He’s never taken his eyes off the road,” George insists.

Continuing down 3rd Avenue, North, Lenny crossed his head staring upward. Wondering what had transfixed his faithful companion, George pointed up in the direction of Lenny’s stare. “Lenny has pulled me out of the street. He’s pulled me to safety before, so [when] he pulled me in this direction, I knew I wasn’t going to walk against that!”

One step after another, Lenny finally got to the top of a set of stairs and pulled his master to a door. “I wasn’t sure what I was walking into. I just knew it was a pretty hefty door,” George recalls.

“I pulled [on the door] out of curiosity and walked in. Once the door shut behind me, it was silent and peaceful. I heard some footsteps approach me: I think it [must have been] the cleaning lady. I asked her where I was, and she stated that I was in the Cathedral of St. Paul.”

“Lenny had never passed the cathedral,” George contends, “but the moment he did, he was dead set on being there. … Lenny acted like he had been coming [there] his entire life.”

After welcoming George, the lady that George first encountered invited him to stay for Mass and said, “Come talk to the priest.” George followed her over to the confessional, stepped in, and told the priest, “Father, I have never been in a Catholic church before, but I was told many years ago that if I ever found myself in one, [I should] just listen.” The priest, Father Douglas Vu, responded, “Well, you may not understand a lot of what you hear, but over time you will start to understand more and more.”

George decided to stay for Mass and remembers feeling at peace. “When I first walked into the cathedral, it was like the world had been shut out. I wasn’t scared.”

George admits to skipping work in order to go to the cathedral the second time because he “was kind of blown away.” Lenny took George to the back pew, but he didn’t go into the pew. “I couldn’t understand why,” he remembers, “so I stepped into the pew.” In that moment, George was tested. “That’s when I discovered there was a kneeler and that Catholics take a knee — I fell face-first on it. I was humbled at that moment. Still, it was a beautiful Mass, and I was really taken by it.”

Knowing he couldn’t keep skipping work, George went online and learned about daily morning Masses. “We got up and walked to the cathedral. It was dark, so it was probably around 5:30 a.m. when I walked in just like before, but instead of Lenny stopping at the back row, he started going up towards the altar and pulling me towards the altar. Once again, that curiosity kicked in. I’ve always been the navigator. I’ve always told him to go forward, left, and right, but he was doing this on his own. I was going along with it, and he got to the altar, took this sharp right, went up this little ramp and through this little corridor, and showed me to a seat.”

At first, George thought Lenny had taken him to a waiting room of some sort. After about ten minutes, he heard footsteps coming from the back of the cathedral. He remembers thinking: “I am about to be in trouble now. I am somewhere I am not supposed to be.” What George heard next was the last thing he expected to hear: “Oh good, you found the chapel. This is where we have Mass in the mornings.” “At that point,” George says, “I knew 100 percent that this is where I was supposed to be … There are sighted people who have no idea where the chapel is!”

Prior to that fateful August morning, George did believe in God, but he didn’t “follow any religion.” He also had a prayer life, but he says that “it was only at night.” The thought of being late to work and having to endure “a lot of grief” from his manager led him to pray his very first morning prayer, asking God to put him where He wanted him to be. “I had been working at Social Security for about 14 or 15 years by then. I was just feeling a little emptiness. I think that is what brought forth that prayer because I knew there was something more, but I just didn’t know where. He showed me that morning.”

George’s story is a prime example of faith formation not always occurring in the confines of a class or an organized gathering. As disciples of Jesus, we are all tasked with not only continuing our own formation but also reflecting our faith in such a way as to help others, Catholics and non-Catholics, on their journey.

Looking back, George had many formators in the faith — all of whom played a part in his decision to join the Church in 2016. Lenny, undoubtedly and quite literally, helped George take the first step of his journey to the Catholic faith. The unidentified lady who first invited him to stay for Mass contributed to George’s journey, as did the woman who gave him his first “lesson.” This lesson came courtesy of a confrontation with a parishioner who did not know why he had his dog with him in church. After a verbal exchange, the woman walked away only to return and apologize. She then walked him over to the baptismal font, plunged his hand into the water, and gently showed him how to make the Sign of the Cross. Making an effort to be a better disciple of Jesus, this woman evoked not only George’s growth but also her own.

Faith formation is a journey: an ongoing journey for every individual. The journey is sustained by the recognition of the grace that is present in our lives. Acknowledging that grace will help us take the next step to a deeper relationship with God, leading us to a life lived with fullness — a fullness which will enable us to become instruments of His love. Reading, listening to others, and even following your curiosity, as George did, are all ways to take the next step. “I thought I knew everything there was to know,” George reveals, “but I wasn’t even hitting the surface. There’s always more to learn.” 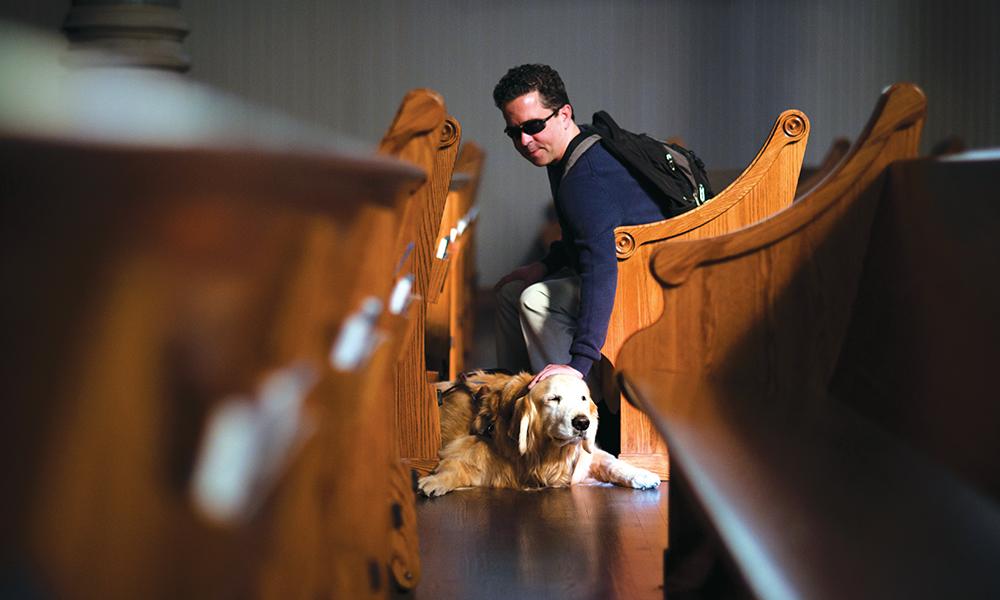 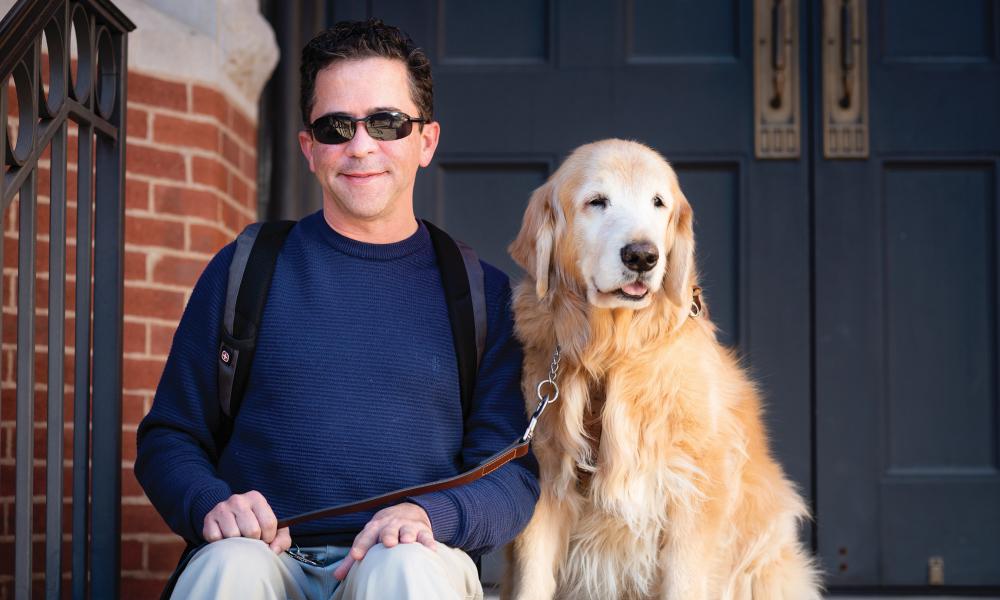 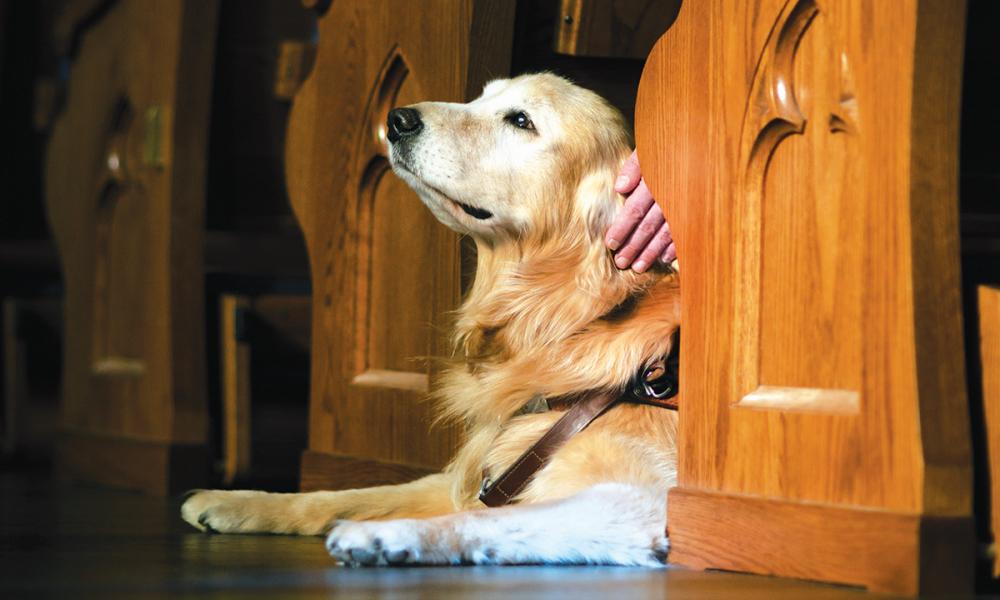 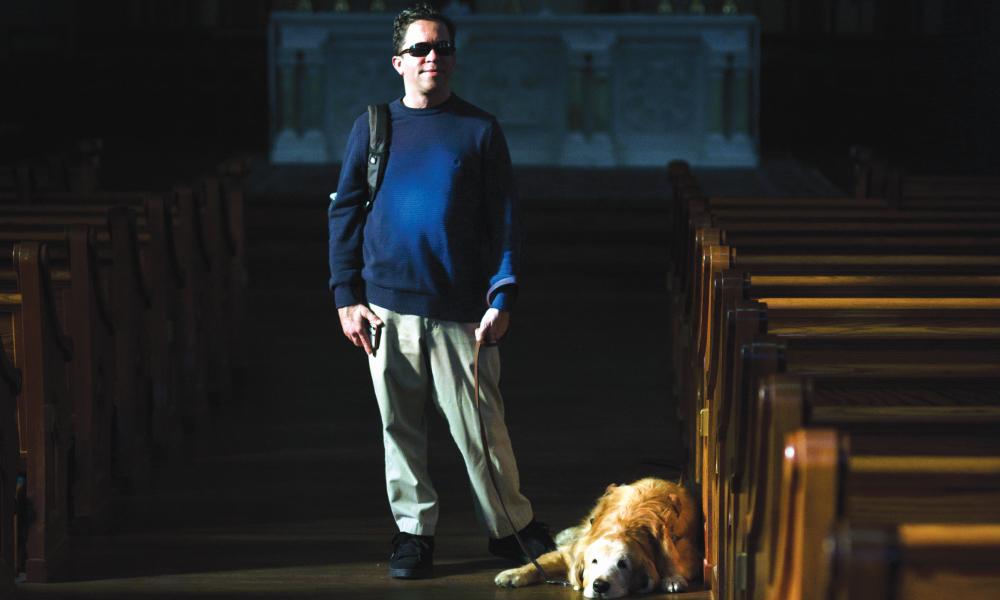 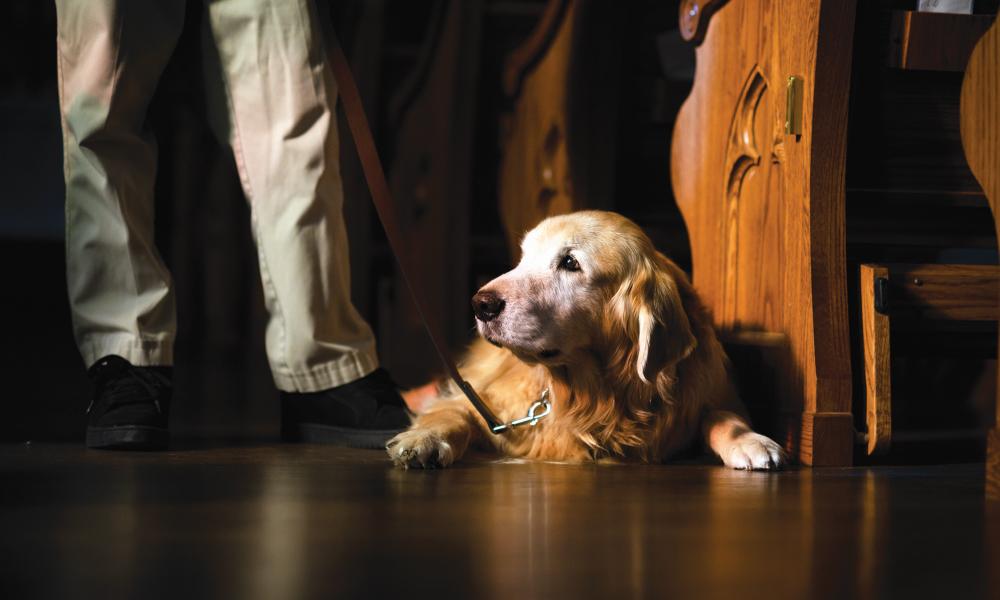 In January, Lenny passed away peacefully while sleeping in his favorite bed. Thank you Lenny for bringing Shannon into the Church!