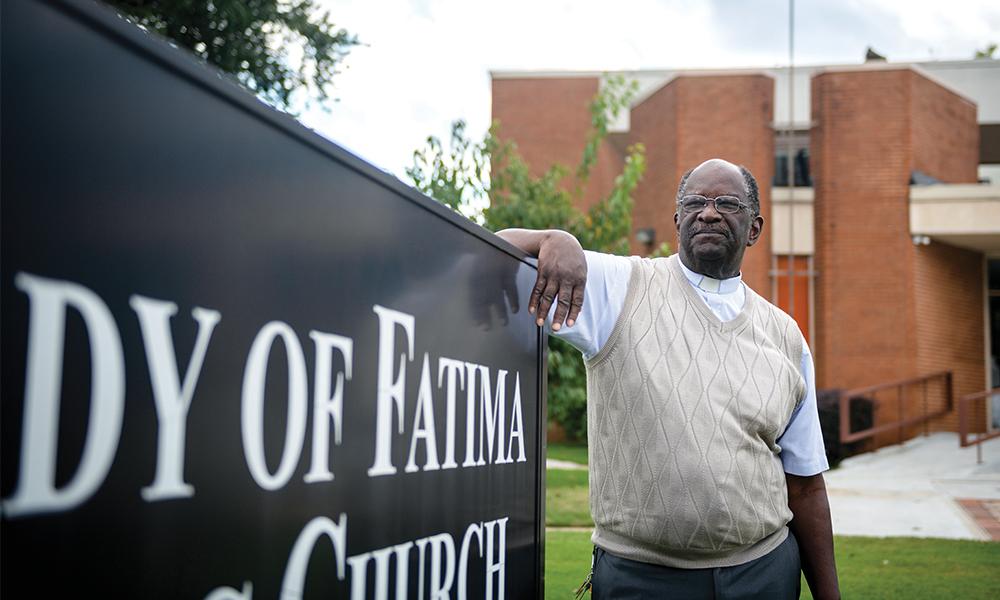 ‘God Has Brought You Here for a Reason’

“I would lay down on the back seat and pretend to be asleep, or I would crunch down on the floorboard so I couldn’t be seen,” remembers Deacon Douglass Moorer. What was the young Moorer hiding from? The Catholic Church.

Growing up in the 1950s and early ’60s, the City of Birmingham was home to many intolerances, one of which was of Catholicism. As with many ostracized groups during that time, negative and oftentimes false stories were circulated about Catholics.

Moorer was told all kinds of stories about Catholics, but the one that made his spine quiver in horror was the one about “little black boys and girls being rounded up” by Catholic priests only to be “cut up and put into freezers for Communion.”

From kindergarten through seventh grade, Moorer attended the same school where his mother taught, Milton E. Sears Elementary, and every day they would pass by Blessed Sacrament, St. Barnabas, and St. Paul’s on their way to school. Needless to say, he did a lot of hiding in those days.

On the first day of school, Sister Mary Maureen, a Sister of Notre Dame, greeted him and directed him to his new classroom. Aside from the fact that his mother had dressed him in “short pants” — a faux pas for eighth-grade boys — his first memory of the classroom was Sister Mary Maureen beginning the day in prayer. Deacon Moorer fondly recalls Sister instructing the class, “In the Catholic way, we begin prayer with the Sign of the Cross: In the name of the Father, and of the Son, and of the Holy Spirit.”

While it was comforting to start the day in prayer, the first week was rocky for Moorer. His family had a long history as members of the African Methodist Episcopal Church, and Moorer’s pride in his faith was deep. For almost every word that Sister Mary Maureen uttered about Catholicism, Moorer had a question, leading her to doubt the new student’s intentions.

At the end of his first week, the school gathered to celebrate the first Mass of the school year. Still unaware of the intention behind his inquisitive nature, Sister Mary Maureen had Moorer sit next to her during Mass. In those days, boys and girls were separated, with boys on the right and girls on the left. Being the only boy on the left side made Moorer uneasy, but he still took the opportunity to observe.

To his amazement, when the priest elevated the Body and Blood of Christ in the Eucharist, Moorer saw a light emanating from the Host and Chalice. He had never seen anything like it. Another thing that struck Moorer was the changed demeanor of the students coming back from receiving the Blessed Sacrament. “I watched the kids go up to receive the Eucharist — the same kids who had given me a hard time all week about my short pants. I watched these kids coming back down the aisle, and it wasn’t the same child. It was like they were saints.”

Afterward, Sister Mary Maureen asked if anyone had questions about the Mass. Not surprisingly, Moorer raised his hand. “Sister, where did the light come from? When he held up that piece of bread it was really bright,” he remembers saying. Flustered, the sister left to get Josephite Father Paul Downey.

The priest entered the classroom and asked Moorer to come with him. Still a bit fearful of Catholics, Moorer remembers wondering if he should “run, go hide, or try to get to his mother’s school.” Luckily, he mustered his courage and spoke with the priest. “I explained to him I saw a light when he held up the Host. He asked what the light looked like, then said, ‘Douglass, I want you to know that God has brought you here for a reason. God has chosen to reveal His presence to you.”

From that point on, Deacon wrote down everything Sister Mary Maureen said in class. “I had ceased to be afraid of Catholics at that point,” Moorer says with a smile.

He was so drawn to the Mass at school that he wanted to start attending Mass on Sundays. He knew, however, that feat was going to take some clever thinking. He decided to tell his parents at dinner that he would receive a failing grade in religion if he did not attend a Catholic Mass on Sunday. It took several tries, but his mom finally agreed to take him.

It wasn’t long before Moorer was back to his clever thinking, but this time it was because he wanted to become Catholic. “I thought, ‘I’ve got to get this Eucharist because that’s really God.’”

Again at dinner, he waited for just the right moment to tell his parents. Surprisingly, as his father was going ballistic, his mother admitted she wanted to join her son in becoming a Catholic.

As a new Catholic, Moorer’s mother insisted that he attend Immaculata High School. Moorer was happy in his studies there, but during the summer after his sophomore year, it was announced that the school was being closed. Forced to choose another school, Moorer expressed his desire to attend Parker High School in order to play football and basketball; however, his mother had other plans.

In 1966, Moorer became one of three black students in John Carroll High School’s Class of 1968. At his 40th high school reunion, Deacon Moorer says he asked his old principal, Bishop William R. Houck, “Why did you open the door to black students when it wasn’t popular?” The bishop’s response was one that made a profound impression on Moorer. The former principal said, “I told the faculty that if we are going to teach the Church’s teachings on social justice, then we must first live them, and if we are going to live them, then we are going to do them. What is right is to open our doors to all of God’s children.”

“One of the things that has always made me proud to be a Cavalier,” Moorer declares, “is that at the time of integration, I went to a school where I was wanted and accepted, not where the people were made to take me.”

“The Catholic Church is the caretaker of the fullness of what Jesus brought from His Father to us. It doesn’t make us better, but it does give us a lot more responsibility to retain and maintain. I think that is what Catholic education does.”

Moore says our responsibility as Catholics entails “teaching the truth in its totality” because if we fail to do so, then we aren’t “teaching the truth at all.” Being willing to “stand on the truth,” claims Moorer, doesn’t equate to “making others feel uncomfortable.”

Like the sisters of Moorer’s youth, who resolutely started every day “in the Catholic way,” Catholic schools continue to be “keepers of the truth,” leading our children down the only path that really matters: the path to Him.