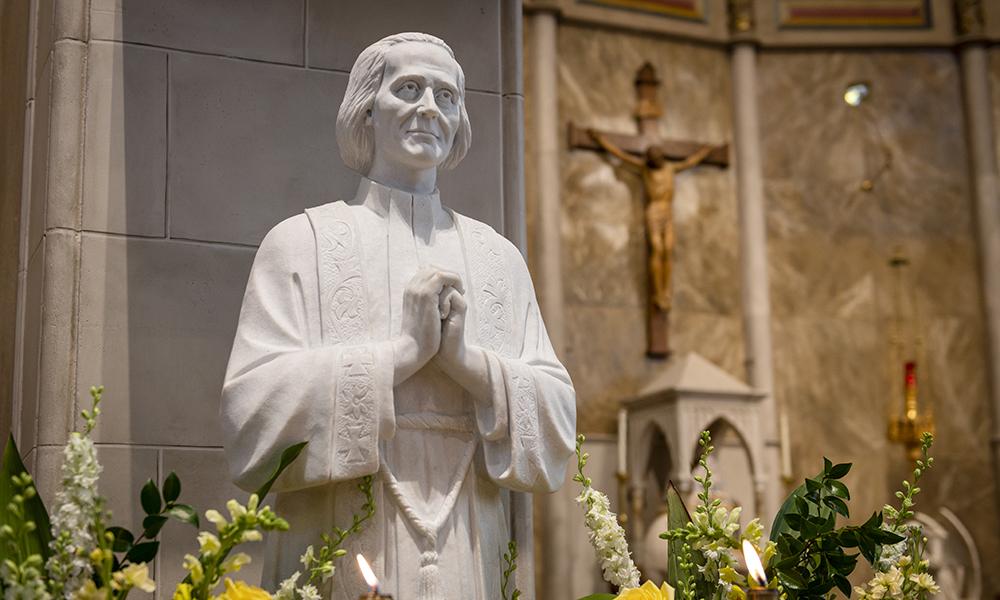 ‘The gift you have received, give as a gift’

On Sunday, Aug. 7, Bishop Raica celebrated Mass at the Cathedral of St. Paul, marking the Solemnity of St. John Vianney, the secondary patron of the Diocese of Birmingham. The complete text of his homily follows herein.

My brothers and sisters in Christ, our cathedral bears the name of our principal patron saint, St. Paul. This intrepid evangelist who, originally known as Saul, vigorously opposed, persecuted, and harassed those who were followers and believers in Christ. Yet, through an amazing conversion experience, recounted in the Acts of the Apostles, Saul became Paul. From one of the persecutors of Christians, to one of the most enthusiastic missionaries and crusaders for Christ the world had known at the time. Through his writings, we get a glimpse about life in early Christian communities where he visited and preached. He knew of their problems and challenges. Still, Paul’s unrelenting passion for proclaiming the Good News of Jesus Christ illustrated the power of God’s Word fearlessly and relentlessly preached.

Throughout our diocese today, we are commemorating our secondary patron, St. John Vianney, the faithful and loyal Curate in the village of Ars, France. Today’s he’s known as a patron for parish priests and confessors. He, too, along with St. Paul, guides our pastoral mission in the Diocese of Birmingham. Born in France, in 1786, he grew up within the context and effects of the French Revolution. Its suppression of religion and religious practices sent many to live their faith underground. To some degree, it weakened the Christian faith but could not eradicate it. Through the tenacity of faithful Christians, he was taught the faith, received communion at age 13 in a Mass celebrated secretly in a kitchen, and looked upon those practicing their faith as heroes. He was ordained on July 12, 1815, after Christianity was again considered legal. After serving for a few years as an associate priest, he was sent to Ars, a community of about 200 inhabitants who had become indifferent to faith because of neglect. As such, it was an insignificant place and so were its residents. So, he viewed his mission not so much about evangelizing the world, but he dedicated his priestly mission to preaching Christ to this little insignificant local rural village where he was pastor. An average person, John Vianney taught the basics of living the Christian life, railing against dissolute living and practices. He lived simply, fasted frequently, and spent a good majority of his life hearing confessions. Slowly, the Christian life in the community began to return through his simple, straightforward faith that became more and more credible, something fascinating, in fact, to those who met him. In a sense, he was telling folks again where to “Look!” (cf. Jn 1:36) to find the answers to their hearts’ longings and desires. (cf. Jn 1:38) At the same time, he started eucharistic adoration in his local community to have the presence of Christ available to all who would come and pray.

Today, St. John Vianney is a springboard to inspire us. We refer to and bring into focus his vocation, his fortitude, his perseverance, his mission. As such, we bring our seminarians together here to the cathedral to pray with them and for them before sending them back to their places of study and formation. In a particular way, we pray that with hearts ever more open, they hear the call of God in their lives more clearly during their time in formation.

We also focus on vocation, not only in the broad sense of following Christ as a disciple, but more precisely as a special call to follow Christ in religious life, particularly in the call to priesthood. His call was not to save the world but to be God’s special instrument of holiness in the place where he was assigned. It was there he did the most good. It was there, an out of the way, unlikely place filled with “nobodies,” that he proclaimed that they, in Christ, were indeed loved – and truly “somebodies.”

Our readings bring us greater focus for mission. The first reading from the great prophet Ezekiel narrates that God appointed him a “watchman.” (cf. Ez 3:17) Watchmen have been part of the security team, watching for looming danger. A lighthouse, too, is a kind of watchman to guide those at sea. They dotted the shorelines of oceans or the Great Lakes. Lighthouses help guide those at sea away from danger and peril. A vocation is a reminder not only to be on the path toward fullness of life, but, through and by means of one’s life, to inspire and guide others toward the good, the true, the beautiful – those deep factors that make our hearts beat with hope just a little stronger. Following Christ closely and with purpose is one way to stay away from the dangerous path of sin that leads to death and nothingness in life.

Our second reading, from St. Paul’s beautiful letter to the Ephesians, is a moving and heartfelt letter written while he was in prison. The sentence that strikes me is: “Live a life worthy of the calling you have received.” (cf. Ep 4:1) In whatever role of service we find ourselves, we are instructed in so many words, “Be the people you say you are” in order to “form that perfect man who is Christ come to full stature.” (cf. Ep 4:13) It is in this way that we build up the Body of Christ because our lives are lived with coherence conforming our hearts more and more to that of Christ.

Our Gospel from St. Matthew highlights the foundation for our vocational call: “The harvest is abundant, but the laborers are few.” (cf. Mt 9:37) There is no question in my mind that we are ready to help potential prospects discern the call to priesthood and religious life. It is a demanding life and one that requires one’s all, especially a spirit of mission, perseverance, creativity, and resilience. Even though we experience failures along the way, our mission is not defined by failures but by faithfulness to the call and the opportunities we find along the way. In the following chapter of St. Matthew’s Gospel, when our Lord calls His Apostles, He concludes (in the older translation): “The gift you have received, give as a gift.” (cf. Mt 10:8) This is one passage that inspired each in my class to say “yes”! I am willing. I am ready! Each person has gifts both similar and diversified to meet the needs and challenges of today. Our seminarians know that each one has something unique to offer. They become part of a great team whose facets radiate the grace and power of Christ.

As we rely on the prayers and support of St. John Vianney, we note that he, too, ran into difficulties. His life was grounded in a relationship with Christ. That’s the only way we can do what we do as priests, religious, or believers.

We are honored by those who have willingly said “yes.” It is my belief that God continues to call young people today to discern priesthood and religious life - in the quiet before the Blessed Sacrament in adoration or listening to someone make a comment such as: “You will make a good priest” or “Have you ever considered priesthood or religious life?” In my own prayer and quiet time, I am more and more convinced that the Lord is calling many young people today to consider a vocation. Because we are mired in constant noise and distractions, our senses are desensitized and anesthetized. The Lord’s call has difficulty in getting through. We might think, “It can’t be for me!” You never know until you try and find out if it is a genuine authentic call. It will be an amazing life you never could have imagined. At least, that’s my own personal experience. I wouldn’t trade it for anything.

In my own mind, my dreams and prayers, a diocese our size should easily have somewhere between 20-30 seminarians in formation. That is my goal so that we will have a robust group of future priests to serve here long after my term is concluded. It’s about planting the seeds and watering them for the harvest tomorrow. Our first task is to pray that the Lord of the harvest will send workers to His vineyard. Who knows what will happen in the future?

Through the inspiration of St. Paul and the holiness and humility of St. John Vianney, may many young people hear God’s voice calling them to something more. Frequently, I echo the words of St. Francis of Assisi who gave us a simple beautiful prayer: It is not “Lord, this is what I will do for You.” No … it is more subtle: We pray – “Lord, what is it You want me to do for You.” There’s the relationship – it is Christ’s work. We are His instruments. We are His watchmen, leading others to a fuller life like Ezekiel, or St. Paul who reminds us to “live a life worthy of the calling,” or the Gospel of Matthew whose prayers search for those ready to be part of the Lord’s harvest team. Today, through the commemoration of St. John Vianney and St. Paul, may many hearts be awakened to hear the Lord’s call: “Come, follow Me!” (cf. Mt 9:9 passim) May God bless you all! 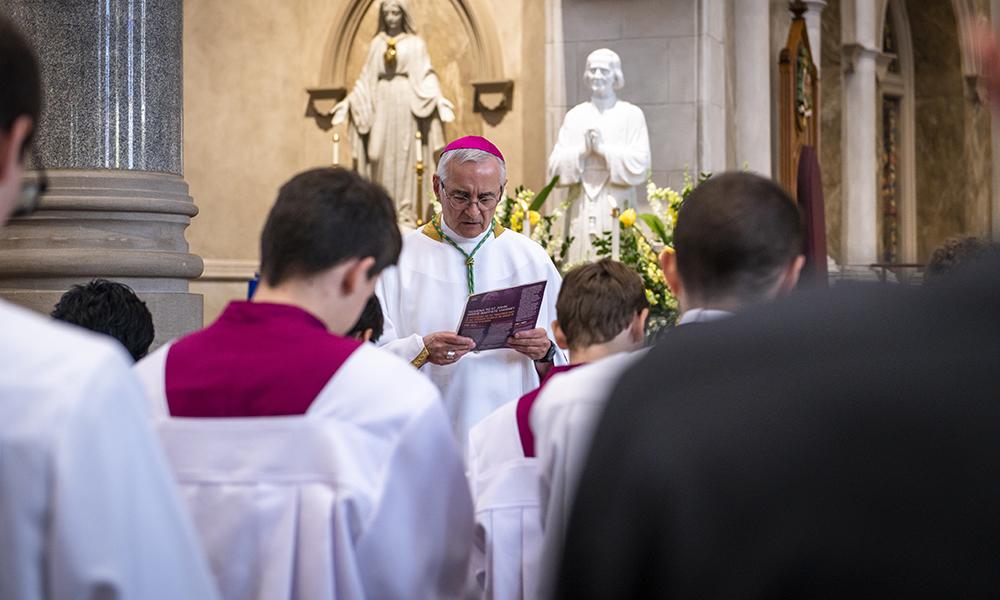 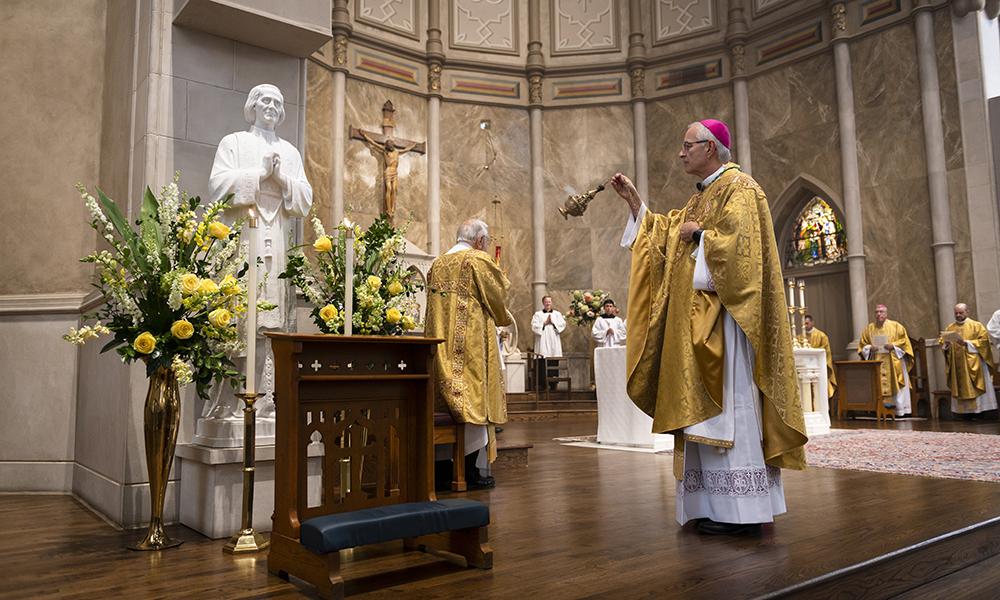 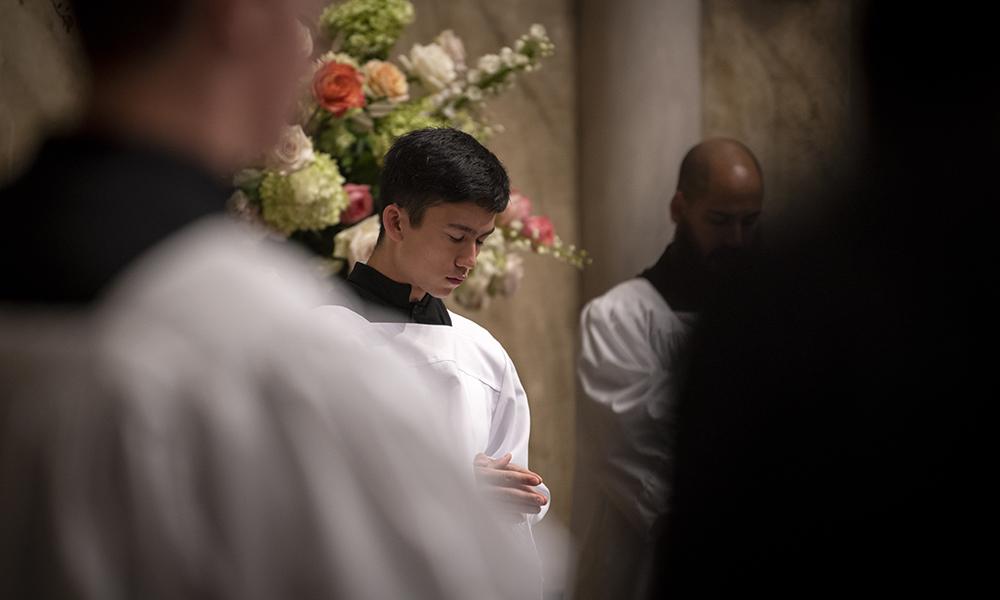