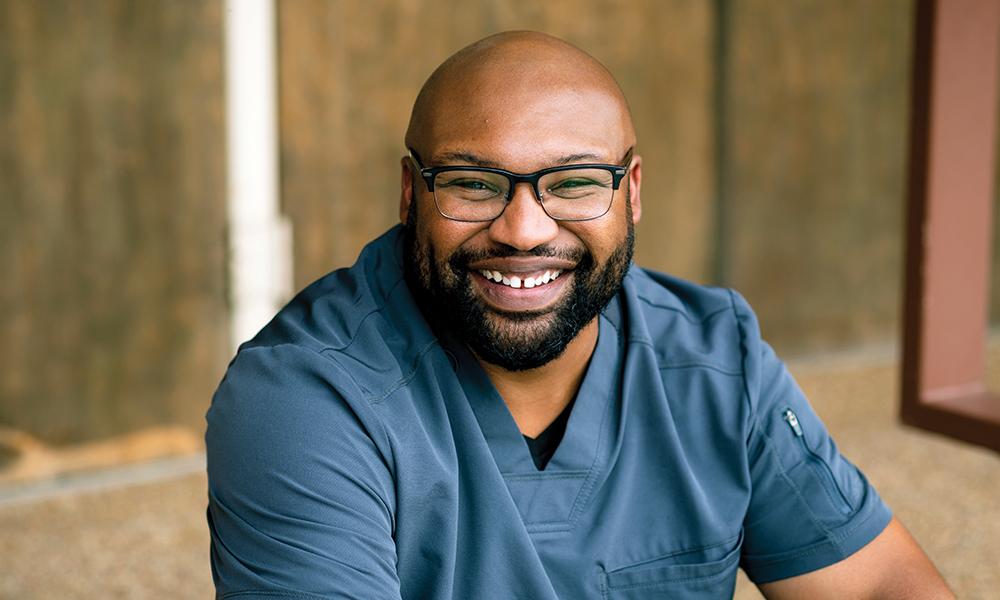 'The Eucharist Stole My Heart'

Once a Southern Baptist, Now a Catholic Man on Fire for the Eucharist

“It felt like Christmas morning. When you wake up, you know Santa’s been there, and the toys are under the tree. It felt like I finally received that perfect gift,” exclaims 43-year-old Brent Patterson explaining how he felt the first time he received the Eucharist.

Growing up in a Southern Baptist household, his great-grandmother, grandmother, mother, and great-aunts were a constant presence in his childhood instilling in him the importance of a relationship with the Lord. That relationship with the Lord deepened when he experienced his church’s communion service. “As a child and a young adult, I always loved going to church…. I knew I was going to be there for three hours, but I still wanted to go.”

As he grew older, Patterson, like so many young adults, slowly drifted away from church. Fortunately, the seeds of faith planted in his youth were not sown on barren soil. “As I continued to fall away from the Church and, seemingly, Christianity altogether, I realized that I was not enjoying the world as my friends and family were. I would be out at certain places like clubs and just want to leave.”

Patterson turned to prayer asking God for direction. He would pray, “Send me where You want me to go but also where I can learn Your true word and learn the truth about You.” It was during this time in his life that he met and married his wife, Dawn, a cradle Catholic.

In time, Patterson developed an intense curiosity to learn more about his wife’s faith. What he was taught about Catholicism in his youth didn’t appear to be true: Catholics didn’t seem to be Mary worshippers, members of a cult, or brainwashers.

Dawn never pressured her husband to attend Mass, but one Saturday evening after about five years of not attending any church, he went to Mass with the understanding that they would sit in the back pew. If any “funny business” started to happen, he was “going to walk out.”

At Mass, Patterson was grabbed by the Liturgy of the Eucharist. “Watching the priest recite the prayers and raise the Body and Blood to the heavens just fascinated me,” he recalls.

Although he was moved by the Eucharist, he refused to consider converting for fear of his family. “If you left the church, you were kind of looked at as an outsider,” he explains. The thought of being cast out of his family kept the idea of converting out of Patterson’s mind, but not for long.

One morning around 3 a.m., Patterson was awakened by the words: “You can’t be in the gray area. You’ve got to pick a side. You’re straddling the fence.” He says he “felt like Christ was telling me that I needed to choose: Him or the world.” Patterson overcame his fear and said to the Lord, “I choose You!”

It was at that moment that Patterson decided to continue attending Mass with his wife. “The Eucharist stole my heart,” he lovingly remembers, “I wanted that closeness to my Father.” He began researching as much as he could. Father Paul Oberg, pastor of Our Lady of Fatima at the time, stealthily invited him to classes, which he would later learn were Rite of Christian Initiation for Adults (RICA) classes. Christ in the Eucharist continued to beckon Patterson, and on April 23, 2011, he was confirmed and received his First Holy Communion. Recounting that day, he professes, “That was the happiest and proudest day of my life.”

Throughout Patterson’s 10 years as a Catholic, he has never lost that hunger, that “burning” for the Eucharist. Sadly, that strong desire rooted in the belief of the Real Presence of Christ in the Eucharist is not one shared with Patterson by almost 70 percent of Catholics in the United States.

“There needs to be more emphasis on the Eucharist,” Patterson says. Much like his childhood relationship with Christ, he thinks sharing the meaning of the Eucharist with the youth will make a big difference. “I think if our youth understood, then they would stay in the Church.” Patterson also stresses the importance of establishing trust and the need for the youth to feel a part their parish community. He says they need to “feel like they’re doing something for Christ…serving in a way. Most of the youth today are looking for service.”

Patterson’s opinion comes from first-hand experience. As a team leader for a local hospital’s rehab department and a physical therapist assistant, he lives a life of service. Second to Christ in the Eucharist, Patterson feels the presence of Christ most when he is working with patients.

“You look down at someone in a bed. They’re weak, they’re suffering, they’re lost, they’re anxious, they’re scared, and then you’re able to walk in their room and become a light in the darkness. It’s an opportunity to minister, to give them the Word, to give them confidence through the Word, and to also bring many people to Christ.”

When the pandemic hit, those in the medical field bore the brunt of COVID-19’s wrath. “It was bad,” he says. “In this field I am supposed to serve, and I am not going to run away from a battle. I am not going to abandon my patients…. They needed someone to come in there and pray with them and give them encouragement. Sometimes I would just sit in a patient’s room just because they didn’t want to be alone. Family couldn’t come in. I would sit in there and do my notes, crack jokes, bring movies, [do] whatever [I] could do to lift their spirits.”

Looking to the time of pandemic, Patterson notes how adversity brings people together and, most of the time, closer to God. “That is the one time we will get on our knees.” We must take this opportunity to learn from our personal pandemic experiences and press the spiritual “reset button.”

“We’ve become so smart, so educated, so self-centered,” Patterson says, “that we’ve lost our child-like faith.” In today’s society, it isn’t “cool” to pray or even talk about Christ. “You’ll get ostracized.”

So what’s the answer? Patterson believes “we need to make Christ cool again.” In other words, we must overcome our worldly fears and not be afraid to believe “true happiness is in Him.”