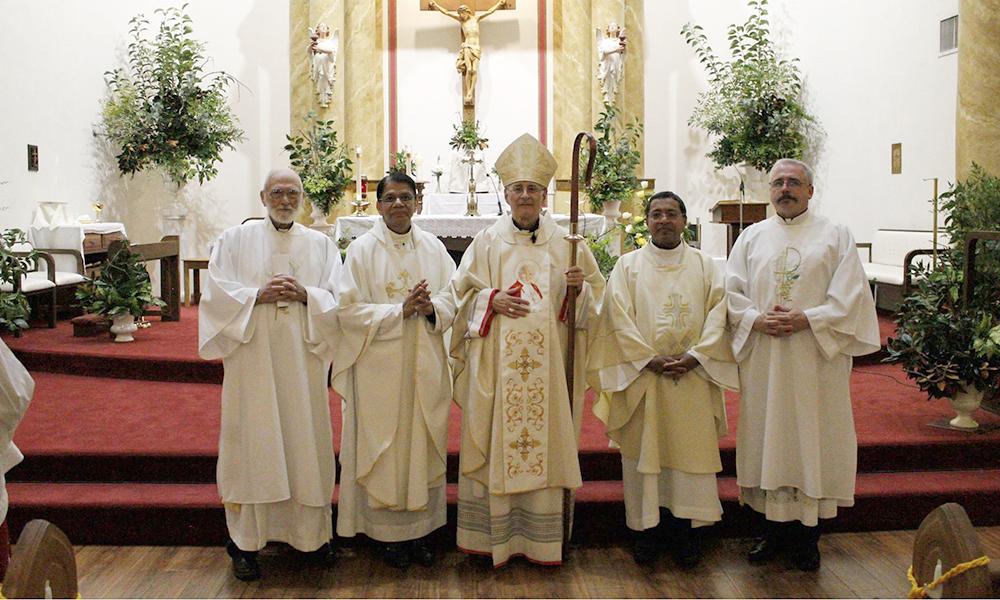 ‘Do Not Be Afraid’

On Oct. 22, Bishop Steven Raica joined the parishioners of St. James Catholic Church in Gadsden to celebrate the feast of St. John Paul II. The complete text of the bishop’s homily follows herein.

Dear sisters and brothers and friends here at St. James,

St. John Paul II would begin every homily with “Praised be Jesus Christ.” To which everyone responded: “Now and forever. Amen!”

Thank you, Father Jose, for your invitation and this opportunity to be here with you and the people of St James. I’m truly grateful and humbled for your invitation. I thank those who have come out this evening. It is a blessed day as we commemorate Pope St. John Paul II whom some have indicated is John Paul the Great!

There was no doubt that he was a man who was a believer in the Christian and Catholic faith.  His life, not an easy one, was plagued by untimely deaths of his family members and a country overrun by the Germans and then the Soviet Russians, which did not value the role of Catholicism in the life of the Polish people. Even his own birth, in May 1920, was somewhat of a miracle. His mother was not very well, and she was urged by her doctor at the time to abort the pregnancy, which she refused. So, another miracle happened because if he had not been born, there would not have been a Pope John Paul II. She remained sickly and died when he was 9 years old. Yet, like most Poles, he was stubborn in his faith and in his belief.

Today, I offer a brief reflection about him and his amazing ability to touch the lives of people.  To do so, I go back to Oct. 16, 1978. I was ordained a priest on Oct. 14, 1978 – that is a time when there was no pope. As you may recall, John Paul I died suddenly and mysteriously after a 33-day pontificate in September. Going into this conclave it came right out of the blue on the evening of Oct. 16. He was introduced on the great balcony of St. Peter’s overlooking the square.  And he spoke to the people – probably the first time an elected pontiff had done so in his own words - to the dismay of the Vatican handlers, saying that he blamed the cardinals who had elected a person from a faraway land to become the Bishop of Rome. His opening words cannot be forgotten. “Do not be afraid” and, at his installation he proclaimed to the world, “Open wide the doors of your hearts to Christ.” He lived those words as a mission from on high. When you think of it, the phrase “do not be afraid” is used 365 times in the New Testament – like one for each day! For many whose hearts are closed, opening our hearts to Christ would reveal an amazing relationship that would enable us to walk with Christ each and every day.

For me, it was truly a breathtaking honor to see Pope John Paul II on the first trip to Rome in 1984. I was quite literally in tears - to see the vicar of Christ. Later, when studying in Rome, we could participate as distributors of Holy Communion at the liturgies he celebrated at St Peter’s.  Those events were a beautiful experience for me and remain a cherished memory. There were two specific highlights for me – one was when my mother and brother came over to visit me and we were given first row seats to meet him personally. My mom still talks about that experience. For me, it was when I celebrated my 25th anniversary of ordination. I was invited to concelebrate morning Mass with him in his private chapel. These are the moments I treasure. Here was a believer with a tenacity who had only one goal – to proclaim Jesus Christ to the end of the earth.

Of course, he was an emissary of hope wherever he went. One poignant memory early in his pontificate was when he returned to Poland in June of 1979, the year after he was elected. It was a dramatic experience. He was told by the communist authorities not to come and tell people he was ill. But they knew that he could only give that excuse for so long. Finally, they allowed him to come. The government didn’t allow a lot of communication about the events. Phone service in Poland was notoriously bad. When they celebrated Mass in Victory Square, Płac Piłsudskiego, in Warsaw, people began to come and come and come. Even the doubters came. And during the Mass he told them that they should be proud of their heritage and their humanity, which came from God. God needed to be in their textbooks and in their schools – not crowded out of their lives. Spontaneously from the people the chant became louder and louder: “We want God” – Chcemy Boga. It is a critical moment because the communist authorities knew their grip on the Poles was coming to an end. There was not a shot fired, but the moral force of his words and the Gospel made a people rise up to claim what is theirs by divine right. It was seemingly so impossible, but through the grace of God, they claimed their faith and their goodness of their humanity.

We might say the same thing for World Youth Day. They had had several attempts when John Paul had proposed the idea. He was told by his advisors that it would never really work out. Then in Denver, Colorado, the formula was developed whereby everyone would go to a large grassy field for a vigil service and spend the night in song and adoration. It clicked, and every World Youth Day since as many as several million youth turned out to see an aging man give witness to Christ and the eternal truths of the Gospel, singing with them “Jesus Christ you are my life.” Yes, many vocations resulted from his larger-than-life gestures, his pastoral visits to countries around the world, his teaching on Theology of the Body, and the many Synods of Bishops he held to address various topics of concern. He also gave us the luminous mysteries of the Rosary and the feast of Divine Mercy and St. Faustina Kowalska. He wanted to hear from people their worries and their joys and offer them hope and courage and fearlessness in facing life.

Like Pope John Paul II, I too, say I am all yours – totus tuus - and I trust in you. He inspired his country. He inspired the world. He still inspires us today here in the Diocese of Birmingham and at St. James in Gadsden. He leaves a powerful legacy for any future pope to not be afraid, to proclaim the Gospel of Christ boldly, and to witness the power of God by their lives.

May God bless you!