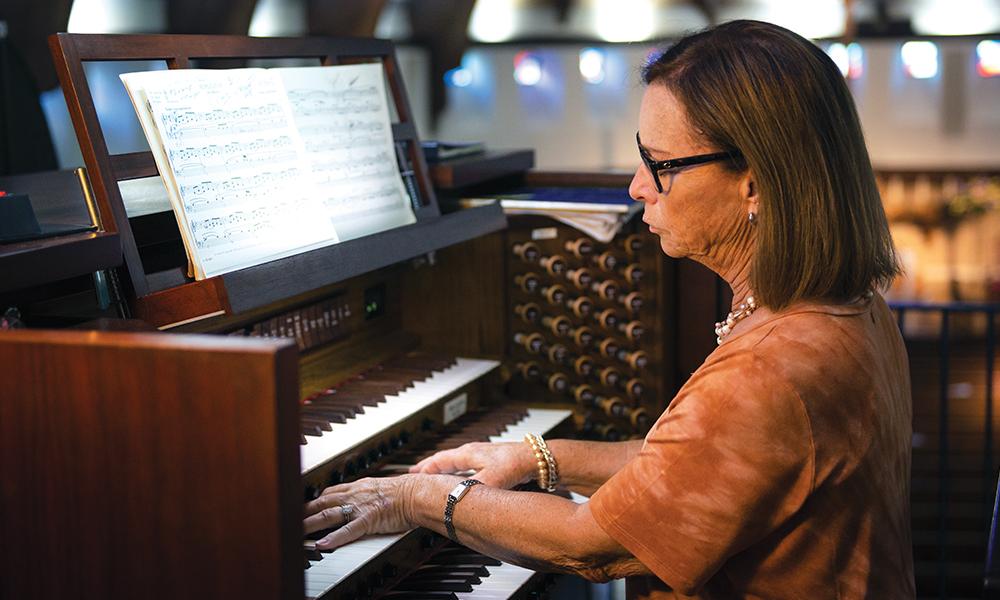 “At an early age, I had a love for music that consumed my attention more often than not,” explains Mary Jones Rhodes, music director and organist for Sacred Heart of Jesus Catholic Church in Anniston.

Rhodes grew up in rural Alabama attending a “little country Baptist church.” It was at the church that she put her God-given gift of playing the piano to good use. In May of 1976, she would be married with one child and another on the way before she decided playing for her church was “too much” to handle.

God had other plans, however. Rhodes had married into a Catholic family with strong ties to Sacred Heart, and the church’s organist was set to leave for college. Less than a month after calling it quits at her own church, she started getting phone calls from Father William Jones, then-pastor of Sacred Heart. Word had gotten out that she could play the piano, and they were in need of an organist. It took Father Jones three tries. When he called the third time asking for help, she reluctantly told the persistent Irish priest, “I will help out for two weeks.”

Although her husband was a practicing Catholic and her children were baptized Catholic, she knew absolutely nothing about the Mass. “I showed up at Sacred Heart Church and walked in with my Baptist hymnal,” remembers Rhodes. When Father Jones saw her, he said in his thick Irish brogue, “We don’t use that book here!” Anticipating Rhodes’ unfamiliarity with the Catholic Mass, Sister Anita Pfieffer, a sister assigned to Sacred Heart School, handed her a list of songs and a sheet of music then instructed Rhodes she would point when it was time to begin playing.

“I went upstairs to a dark, little, bug-ridden balcony,” Rhodes recalls. With only three months of organ study under her belt, she completed the Mass, but she had forgotten to press the crescendo pedal to make the sound. “I played the whole Mass and nobody heard me,” she exclaims. “That was my first day.”

When her initial two-week obligation was complete, she agreed to “just do one more week.” With each passing week, she would agree to one more. After six months had passed, Sister Anita informed Rhodes that she was being transferred to another parish. It was time for Rhodes to be on her own.

“It took me a while….I would look for the word, then play.” For seven years, Rhodes grew in her knowledge of the Mass, but because she was not Catholic, she could not receive Communion. Being in this “no man’s land,” as she calls it, pushed her to approach the parish’s new pastor, Father Paul Donnelly, about becoming Catholic.

After receiving direction from Father Donnelly, Rhodes became Catholic and continued her music ministry with her “new” church family. When Father Donnelly’s tenure came to an end, she almost quit. Life had become busy and hectic, but Father Donnelly insisted that she reconsider. “You need to stay because there are windows that are about to open for you,” he told her.

The windows Father Donnelly spoke of did open. Father Richard Donohoe was assigned pastor of Sacred Heart, and it was at that time that Rhodes learned liturgy. “I didn’t even know what the word liturgy meant,” Rhodes says with a laugh. “I don’t think I had ever heard of the word.”

After Father Donohoe’s arrival, he and Rhodes went to lunch. She says he “leaned into the table” and asked, “Have you ever thought about getting an education in the organ?”

Even though she questioned how her education and job could be managed simultaneously, Father Donohoe reassured her, “We will work around it.” At times it was challenging from an Ash Wednesday Mass sung a cappella to Rhodes racing across Jacksonville to Anniston after biology classes one semester to play vespers services. Five years of “making it work” led to Rhodes earning a degree in music with an emphasis on organ performance.

Rhodes sees the degree as a “huge accomplishment” in her life, one that would not have been possible without the assistance of the Anna Catherine Grace Music Fund. The fund was created to assist music departments throughout the Diocese of Birmingham provide an education for musicians. Every month Rhodes would apply for the scholarship, and every month, with her mom paying for her books and her husband providing the difference, she had enough to keep going to school.

Why would Father Donohoe offer the opportunity of an education? Why would an individual establish a fund for musicians?

While the importance of music and art can at times be overshadowed, the answer lies in the reality that sacred music, like all sacred art, plays a vital role not only in our faith lives, but in evangelization. “Sacred art and music reach people so deeply, connecting them to what God can do for us,” states Rhodes. Evidence of that connection can be seen in Rhodes’ story of the song, “Holy is His Name.” The hymn, one of Father Donohoe’s favorites, was played frequently at Mass during his time as pastor. “We would sing it so well,” she remembers. “To this day, it is Sacred Heart’s song.” The song struck a nerve. Every time the song is played, Rhodes is approached by at least one parishioner expressing their gratitude with the words, “I needed that song.”

The power of that one song had, and continues to have, the amazing ability to draw people “to the love of God.” (Catechism of the Catholic Church, no. 2502)

Recently, Rhodes has been dealing with several health issues, mainly arthritis, osteoporosis, and a bad hip. She started questioning whether or not she should, or even could, continue. Luckily, she got her answer.

At the parish, the Hispanic community has been growing “exponentially,” says Rhodes. Father John McDonald, current pastor of Sacred Heart, encouraged Rhodes to stay and help the community. For her, it was yet another “window” to open. She has been instrumental in teaching the community liturgy. “At first,” she says, “they were a little scared about it, but they are extremely wonderful to work with!” She beams when talking about the music for the Spanish Mass. “It is so much fun to keep up!”

Rhodes has been doing more than just “keeping up,” however. This past August, she celebrated her 45th year at Sacred Heart. While she contends God has not “let her see the whole picture,” she is certain of His plan.

“One of my prayers has always been as I begin to play, ‘Dear Lord, guide my hands over these keys, that the music I play can reach one person in this congregation today.’”

From her reluctant concession in 1976, “I will help out for two weeks,” to her new adventures with the Hispanic community, Rhodes is using her God-given gift of music to reach out to the parishioners of Sacred Heart, reflecting the Divine and drawing them into communion with Our Lord and Savior.

Mrs. Anna Catharine Kidd Grace established a fund in memorial to her husband “to do everything possible to upgrade congregational singing in our services so that we can share a further dimension of our prayer life, and that our music be an addition to our prayer to Almighty God.” This fund supports diocesan music initiatives as well as provides assistance for parishes and individual musicians working in or preparing for music ministry. Please contact Francisco Carbonell, Diocesan Director of Music, for more information at fcarbonell@bhmdiocese.org or 205-838-8322.