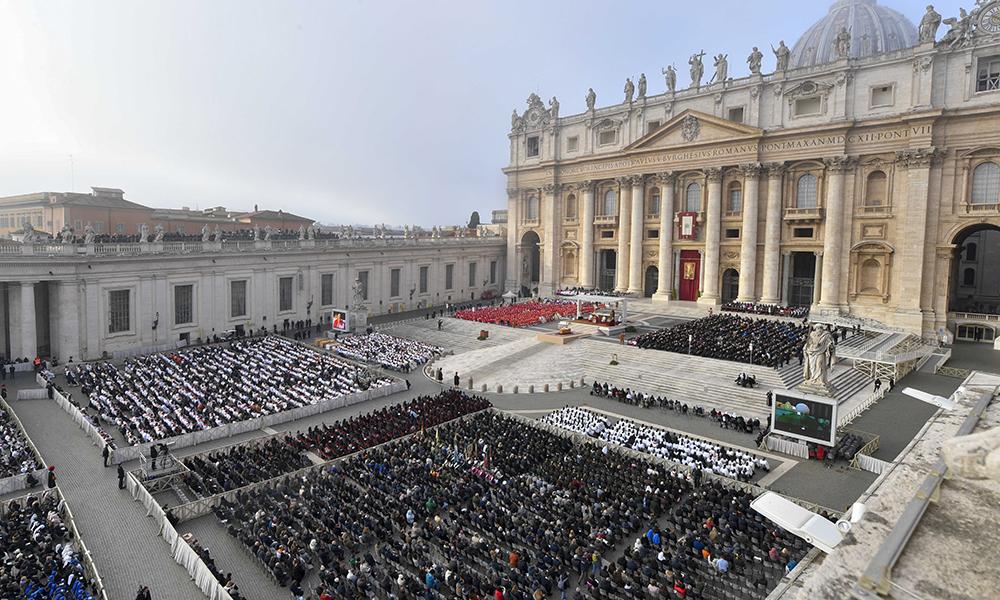 Tens of thousands of people were present in St. Peter’s Square for the funeral Thursday of Pope Emeritus Benedict XVI, a leading theologian of the 20th century and the first pope to resign from office in nearly 600 years.

Royalty, cardinals, patriarchs, government officials, and many Catholic families and religious attended the funeral on a cold and foggy morning at the Vatican. More than 3,700 priests concelebrated the Mass.

The ceremony began with the transport of the pope emeritus’ wooden coffin from the basilica to St. Peter’s Square.

Archbishop Georg Gänswein, Benedict’s personal secretary, approached the coffin, knelt before it, and kissed it. The crowd then prayed the sorrowful mysteries of the Rosary in Latin for the repose of the soul of the late pope.

The funeral Mass was simple and solemn, in accord with Benedict XVI’s wishes. The Sistine Chapel Choir sang the “Salve Regina,” “In Paradisum,” and other hymns.

An image of the resurrection of Christ was hung from St. Peter’s Basilica behind the altar.

Pope Francis presided over the funeral for his predecessor. In his homily, he reflected on Jesus’ final words on the cross: “Father, into Your hands I commend My spirit.”

“God’s faithful people, gathered here, now accompany and entrust to Him the life of the one who was their pastor,” he said.

“Like the women at the tomb,” he said, “we, too, have come with the fragrance of gratitude and the balm of hope, in order to show him once more the love that is undying. We want to do this with the same wisdom, tenderness, and devotion that he bestowed upon us over the years.”

Benedict XVI died on Dec. 31 at the age of 95. As confirmed by Archbishop Gänswein, his last words were “Signore, ti amo,” Italian for “Lord, I love you.”

Nearly 200,000 people came to see Benedict XVI lying in state inside St. Peter’s Basilica in the days ahead of the funeral.

“Together, we want to say: ‘Father, into Your hands we commend his spirit,’” Francis said in his homily. “Benedict, faithful friend of the Bridegroom, may your joy be complete as you hear His voice, now and forever.”

The Vatican only invited two official state delegations — from Italy and Germany — to the funeral, but some heads of state and public figures decided to attend in an unofficial capacity.

In the Prayers of the Faithful, the second prayer was said in German: “For Pope Emeritus Benedict, who has fallen asleep in the Lord: May the eternal Shepherd receive him into His Kingdom of light and peace.”

At the end of the funeral Mass, Pope Francis presided over the Final Commendation and Valediction, which were followed by a moment of silent prayer.

Pope Francis approached with a cane and prayed while touching the wooden coffin of his predecessor.

Bells tolled and the crowd applauded as Benedict XVI’s coffin was carried into St. Peter’s Basilica to his place of burial in the basilica crypt. People waved flags and banners, including one that said, “Santo Subito,” calling for Benedict’s immediate canonization.

Born Joseph Aloisius Ratzinger, he was elected to the papacy in April 2005, taking the name Benedict XVI, after decades of service to the Catholic Church as a theologian, prefect for the Congregation for the Doctrine of the Faith, cardinal, and one of the closest collaborators of St. John Paul II, whom he succeeded as pope.

Widely recognized as one of the Catholic Church’s top theologians, Benedict’s pontificate was marked by a profound understanding of the challenges to the Church in the face of growing ideological aggression, not least from an increasingly secular Western mindset, both within and outside the Church. He famously warned about the “dictatorship of relativism” in a homily just before the conclave in 2005 that elected him pope.

“Joseph Cardinal Ratzinger was elected as pope and took the name Benedict XVI toward the end of my first year of formation at Mount St. Mary’s Seminary,” remembered Father Bryan Jerabek, pastor and rector of the Cathedral of St. Paul in Birmingham. “We were all watching the white smoke live on television and were thrilled when the ‘Habemus papam’ happened and he was announced, especially because he had been so prominent during the papacy of our beloved John Paul II.” Father Jerabek acknowledged the pope’s election as “a sign of continuity with that which had contributed” to his and many other seminarian’s “inspiration and discernment of a priestly vocation.”

Towards the end of his pontificate in 2012, then Bishop Robert J. Baker traveled with then Bishop Emeritus David Foley to Rome for the Diocese of Birmingham’s ad limina visit, a meeting which takes place roughly every five years between bishops and the pope. Accompanying the bishops were Fathers Jerabek and Richard Donohoe.

Reminiscing about his visit in 2012, Father Jerabek said: “The visit was brief and surrounded by much protocol. I do distinctly remember the atmosphere as we awaited our turn in an antechamber of the Apostolic Palace: even the bishops seemed a little nervous, like seminarians again, as we waited to meet the successor of Peter! I will always treasure these memories and forever recall with gratitude the papacy of Benedict XVI, who deeply inspired me on my own journey to the altar.”

On Feb. 11, 2013, the 85-year-old Benedict shocked the world with a Latin-language announcement of his retirement, becoming the first pope in 600 years to do so. He cited his advanced age and his lack of strength as unsuitable to the exercise of his office.

Reflecting on life after death in an Angelus message on Nov. 2, 2008, Pope Benedict XVI said eternal life will be like “immersing yourself in the ocean of infinite love where time — a before and an after — no longer exists. Fullness of life and joy: This is what we hope for and expect from our being with Christ.”

“There are many technical points that we could elaborate on from his many books, homilies, and talks that he thoroughly researched so that he could know at the deepest level all the theological nuances,” remarked Bishop Raica in his Requiem Mass homily on Jan. 3. “The heart of his own faith, which he didn’t consider unreasonable, came down to this point. ‘Lord, I love You!’ We thank the Lord for this man’s genius, for his ‘yes’ to the Lord’s call to be a priest, a bishop, a cardinal, and successor of Peter.”

In the words of our own Bishop Emeritus Baker, who was appointed Bishop of Birmingham in 2007 by Pope Benedict, “[Pope Benedict was] a great theologian, teacher, preacher, and pope. May he now receive his Heavenly reward.” 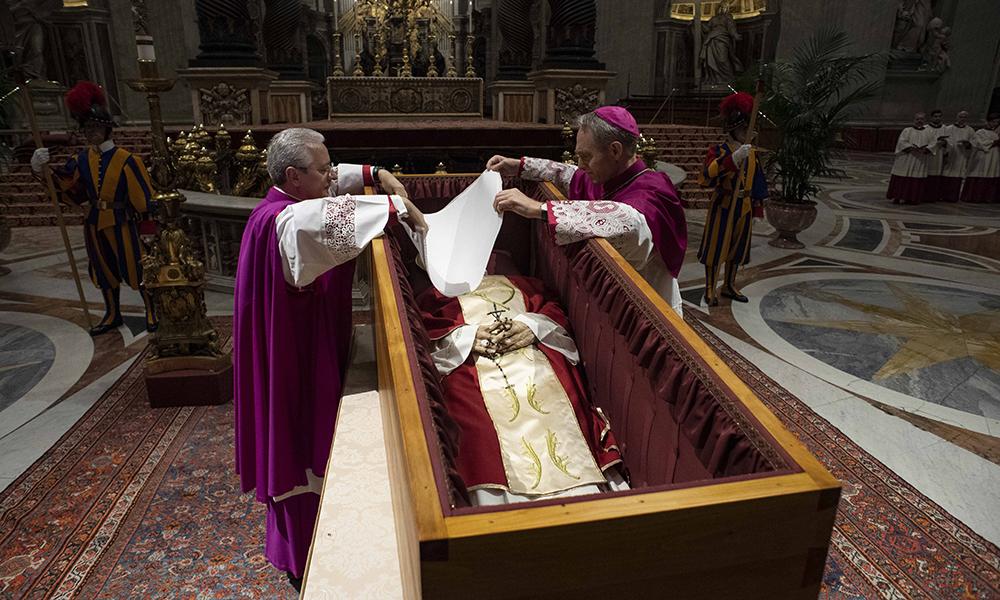 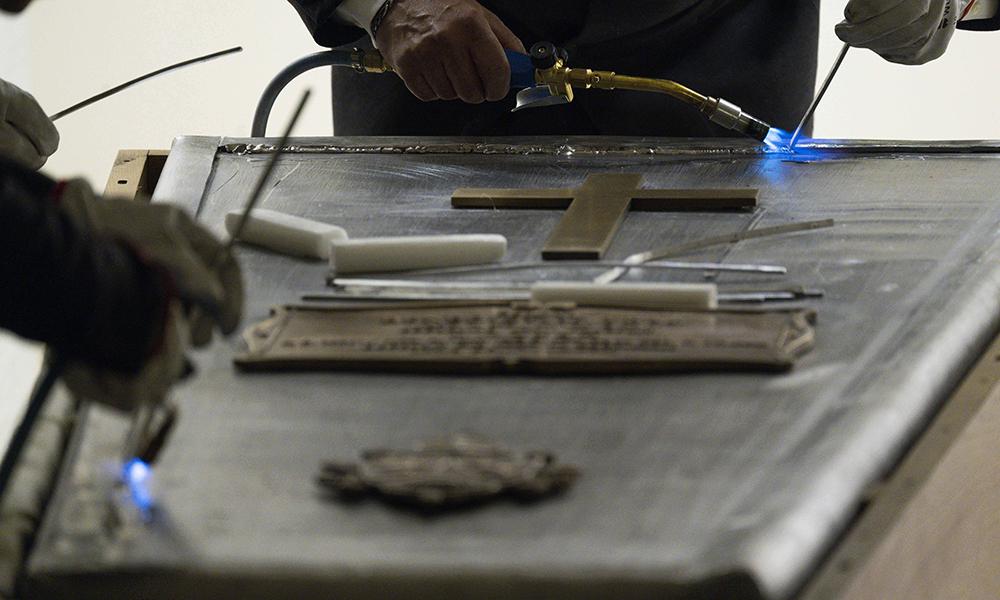 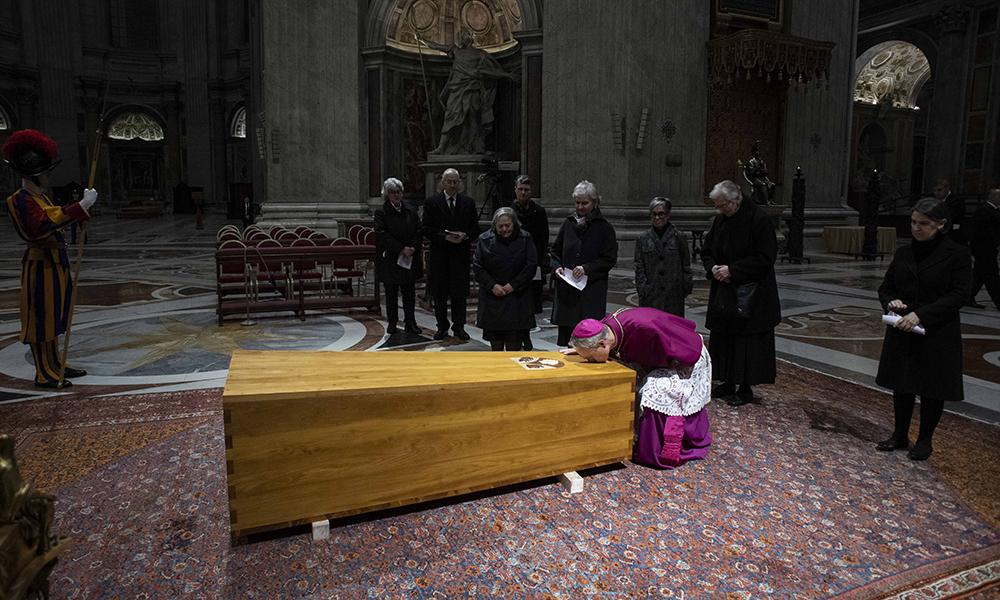 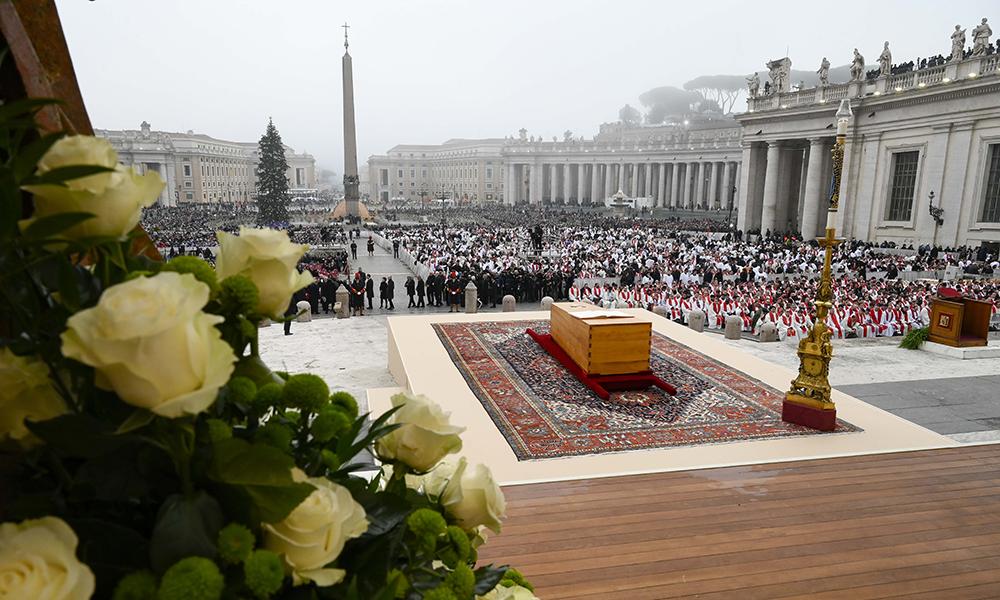 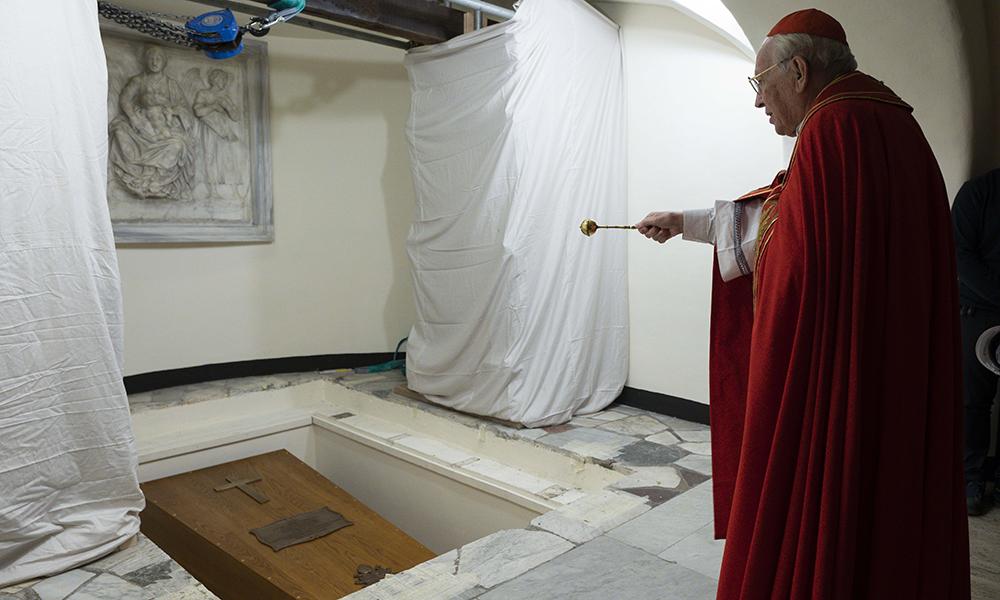 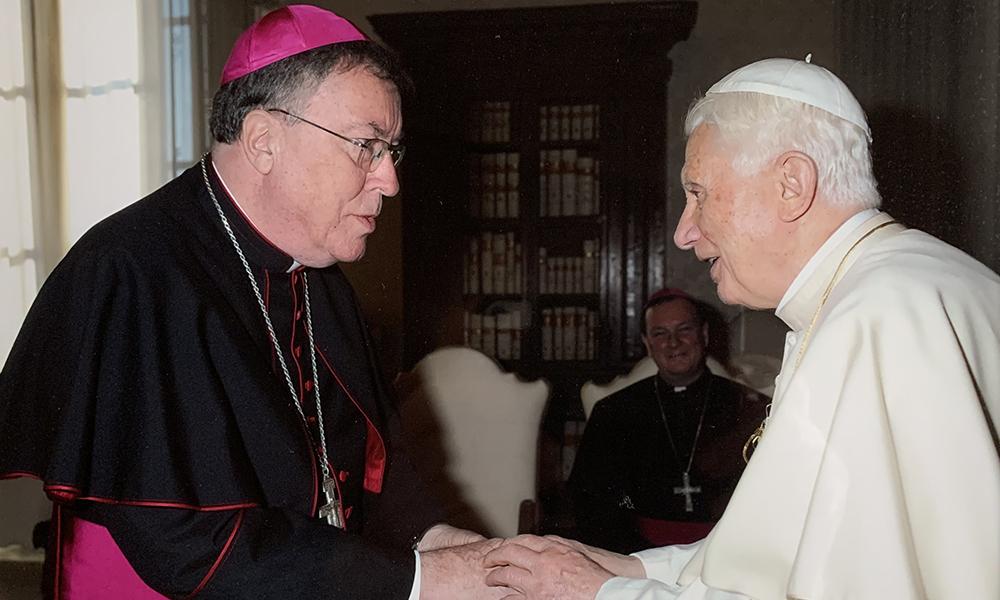 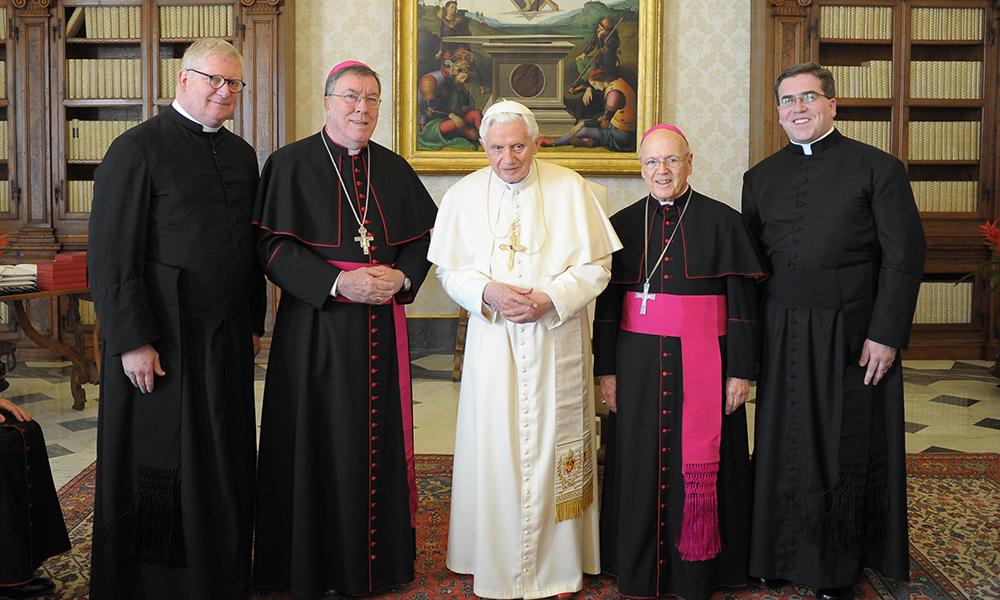