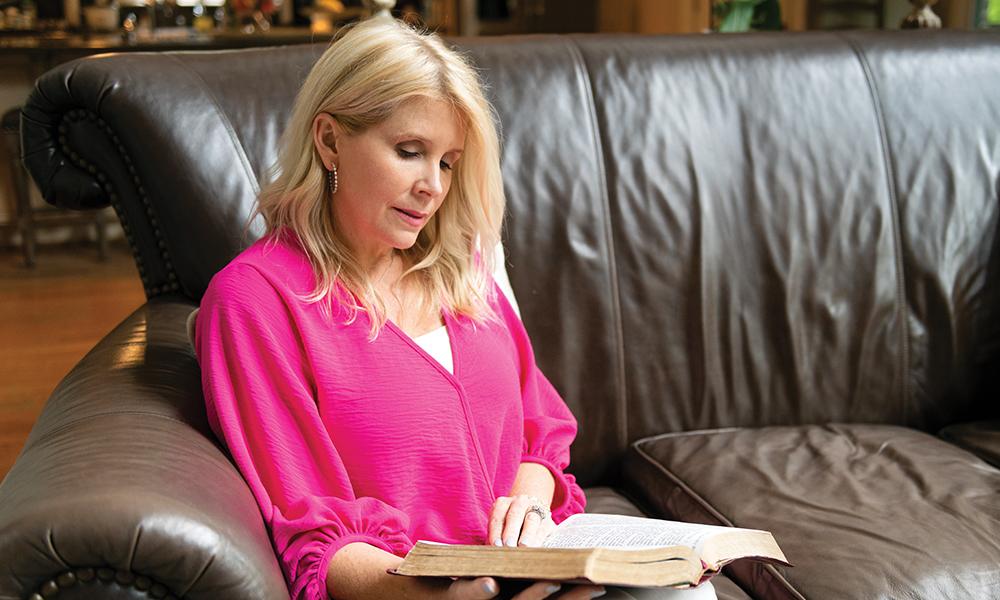 ‘All Gifts Are Meant to be Shared’

“Sharing the truth and beauty of the Catholic faith is absolutely my favorite thing to do,” says Kayce Maddux, a married mother of three.

Maddux, however, didn’t grow up Catholic. Her journey to the faith began when she met her husband-to-be in high school. “It was very superficial,” she says about her Catholic faith in the early days. Eventually, however, three sons would be born, concreting Maddux and her husband’s role as the primary educators of their children.

The couple took the role very seriously. Their faith could no longer be “superficial.” She remembers: “We wanted to dig deeper into our faith, learning why, as Catholics, we believe what we do. That led us down a beautiful road that we walk every day, knowing there are always new truths to discover.”

Their efforts led them to a decision. One Sunday, Maddux and her husband decided to “go to the church library and read a book” while their kids were in their parish’s Parish School of Religion (PSR) class. That small, seemingly insignificant, decision had resounding effects. One mom saw them, inquired about what they were studying, and decided to join in reading the same book, A Catholic Guide to the Bible by Father Oscar Lukehar. Soon, three more couples were a part of the group. As word got out, more and more people joined.

“It became so big, so fast because people are hungry,” Maddux says. Her own hunger led her to St. Theresa of the Child Jesus Catholic Church in Leeds. After hearing about a PSR program instituted by the pastor, Father Gray Bean, she started taking her family and invited other families to join them. In short, the program, Family Catechesis, allowed parents and children to learn the same content, sometimes together and sometimes separately.

Seeing the thirst for the faith in her peers, Maddux, her husband, and four other couples decided to start gathering with their children to “eat, pray, and learn.” The families rotated houses for a simple gathering which included a meal, about 20 minutes of prayer, and catechesis. Word spread like wildfire with close to 80 people attending the gatherings.

Catholic Family Fellowship, as the group came to be called, brought people from all different parishes. “It was totally Holy Spirit–driven,” Maddux proclaims about the success of the group.

When the pandemic hit, the Holy Spirit was the driving force in yet another gathering Maddux had a hand in organizing.

“With the absolute insanity that began in 2020, I think it was clear to many that we were in an unprecedented spiritual war. Complaining on Facebook, isolating ourselves, or finding comfort in food, TV, etc. proved impotent. The only way to powerfully and effectively fight was to follow St. Paul’s advice and put on the ‘full armor of God’ and to pray together as Jesus instructs us in Matthew’s Gospel.” One of her friends “had the idea of meeting to battle with prayer.” They invited friends and family, who also invited friends, family, and clergy. Most importantly, Maddux and those involved “invited God to do His thing and He did.”

The group “battled” with the rosary as their weapon. The Rosary Rallies were held on a friend’s farm. “There is something so powerful about coming together…to intercede for our families, the Church, and our world! We didn’t live in the same neighborhoods or go to the same parishes, but what we did have in common was the anchor of Christ.”

Having the “anchor of Christ” can be transforming. Ultimately, transforming lives will transform the Church, and a key to this transformation is missionary discipleship. In Catholicism’s past, small groups were commonplace; however, over the years, our Protestant brothers and sisters have honed the practice.

“For being such a structured religion, I’m not sure we have such an organized approach as our non-Catholic brothers and sisters have! I think we have the ministry and worship part down but might need a bit more practice with the evangelism and discipleship parts. The key to evangelism is saying yes to Jesus’ command to go and tell others about the Good News and to the invitation to accept the gift of salvation. Discipleship is walking with others as they journey, too. It’s all about sharing the Gospel with others.”

Maddux says that those wishing to start a small group should never forget that the sacraments “are the life-blood of the Church.” Striving for holiness must be rooted in the sacraments. She also suggests the faithful should “discern what [they] want the focus of the group to be. It can be as simple as coming together to pray, attending Adoration together or simply sharing a meal and getting to know other Catholics in the area.”

“Don’t let fear get in the way of inviting anyone,” she instructs, “but don’t be offended if they decline.” Maddux does stress, however, that the only fear anyone should have is of not praying first. The key to success is “asking God what He wants. Remember, it’s about God and not you.”

Our faith is such a beautiful gift, Maddux says, and “all gifts are meant to be shared.” When the gift of the Catholic faith is shared, especially through small groups, “they multiply.” “That’s exactly what our limited time [on] this earth is about, building the Kingdom of God. He loves us and wants our cooperation in His big, beautiful plan!”

The Diocese of Birmingham’s Office of Discipleship and Mission exists, in large part, to provide assistance to individuals and parishes in beginning and sustaining effective small groups.

If you'd like to start your own small group or talk with your pastor about starting a small group ministry in your parish, the office can provide training, materials, resources, coaching, and any other support. Likewise, if you want to find a small group to join or if you have a small group you’d like to open up to others, please contact Alex Kubik at: 205-776-7186 or akubik@bhmdiocese.org.